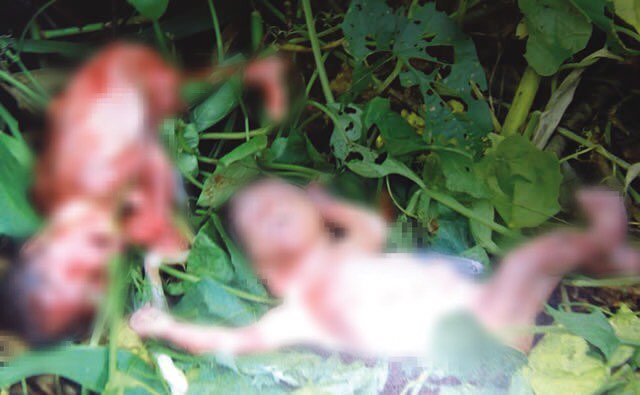 The Lagos State Police Command has begun investigation into the death of two newborn babies, whose corpses were recovered from a canal beside a filling station in the Ajangbadi area of the state.

PUNCH Metro learnt that the two boys, suspected to be twins, were left in the canal on Friday.

A crowd of residents, who were drawn to the scene, was reported to have started taking snapshots of the babies before the arrival of policemen from the Ilemba Hausa division.

After seeing the corpses, the policemen were said to have called the attention of the State Environmental Health Monitoring Unit, which removed and deposited them in a mortuary.

A police source wondered why the residents did not act immediately they saw the babies, adding that the twins were dead by the time the police arrived.

He said, “A resident alerted us to the scene. By the time we got there, the babies were already dead. There was a crowd of onlookers, some of them were taking snapshots. It is probable that the babies were dropped by their mother for reasons best known to her.

“We searched all the communities to see if we could find her or anyone who could volunteer any useful information, but we couldn’t. It is sad that while many women are looking for children, someone could take two baby boys and dump them in a canal.”

She said, “We got the information around 1pm on Friday and our operatives attached to the Ilemba Hausa division went there and saw the corpses of the infants in the canal. We discovered that they were two corpses of newborn male babies, packed in a polythene bag and abandoned by the canal by unknown person(s).

“The corpses were removed and deposited at the Badagry General Hospital morgue for autopsy. But effort is on to track down the perpetrator(s) of the act.”

Posted by Lawrencia at 7:56 am
Email ThisBlogThis!Share to TwitterShare to FacebookShare to Pinterest
Labels: Crime