Niger Delta Avengers Announce Ceasefire To De-Escalate The Conflicts, Promising To Show Support For Any Negotiation, With Federal Government 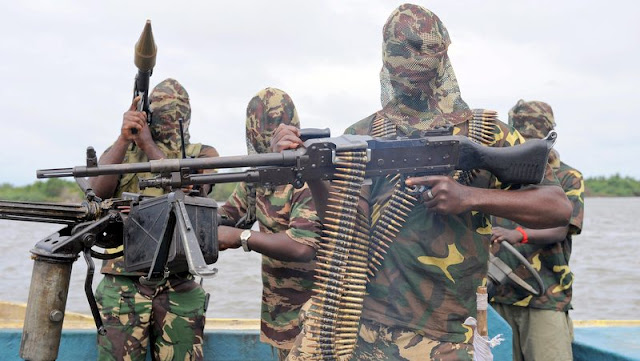 The struggle has always being a Pan-Niger Delta one, we only know the anti Niger Delta elements are using some disorganized characters from the region to scuttle all effort to restore the essence of our humanity; resources control and self-determination.

We are going to support any collective/negotiation team emerging from the Chief (Dr.) Papa Edwin Kiagbodo Clark Niger Delta elders and genuine stakeholders conference to engage with the federal government of Nigeria, representatives from the home countries of all multinational Oil Corporations and neutral international mediators that will be focused on achieving the short, medium and long term frameworks and objectives to de-escalating conflicts in the Niger Delta.

Most of the frameworks and objectives are clearly stated in various reports, declarations and recommendations of the likes of the Sir.Henry Willinks minority rights reports of pre-independence Nigeria (1957-8), The Kaiama Declaration document, The General Alexander Ogomudia report, The Leedum Mittee headed, Niger Delta Technical Committee report and restructuring to fiscal federalism.

We have resolved to reject any idea of the peace of our times; we want the peace with honor this time around! Our advice to our Niger Delta elders and genuine stakeholders is that, whenever this inhuman project called Nigeria and her government is ready for dialogue/negotiations with them, this mandate should be treated with that care as driving a vehicle like that of a truck laden with fire.

We are going to continue the observation of our unannounced cessation of hostilities in the Niger Delta against all interest of the Multinational oil Corporations, but we will continuously adopt our asymmetric warfare during this period if, the Nigerian government and the ruling political APC continues to use security agencies/agents, formations and politicians to arrest, intimidate, invade and harass innocent citizens, suspected NDA members and invade especially Ijaw communities.

We promise to fight more for the Niger Delta, if this opportunity fails. Therefore, we will give our Niger Delta elders and genuine stakeholders that tacit support to the dialogue table with the government and the Multinational oil Corporations whenever the enabling environment prevails.

We also use this medium to warn those using rogue platforms like the defunct so-called MEND, RNDA- Cynthia Whyte especially Charles Okah who is franchising these internet based banditry from his prison cell, through Victor Ebikabowei Ben (Boyloaf), Timipre Silva, Selekaye Ebikabowei, Ayirimi Emani, Michael Johnny, Governor Adams Oshiomole to please inform those their paymasters that the days of doom are here. That those sold and bought up interests from around the corridors of power cannot arm-twist the NDA with bandits, drug addicts, illegal bunkerers, bank robbers and disorganized characters to derail the Niger Delta struggle.

Posted by Unknown at 12:13 pm
Email ThisBlogThis!Share to TwitterShare to FacebookShare to Pinterest
Labels: NationalNews