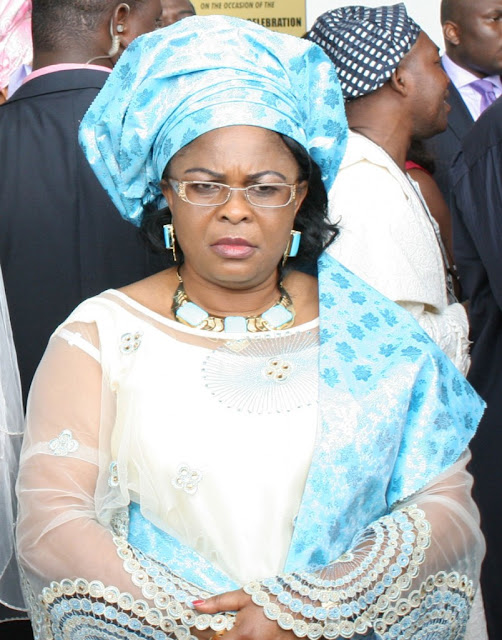 Having frozen her personal account with a balance of $5m as well as four other accounts linked to her with a balance of $15.6m, the Economic and Financial Crimes Commission is set to invite Dame Patience Jonathan, the wife of former President Goodluck Jonathan.

Impeccable sources at the EFCC told SUNDAY PUNCH that detectives had visited the Skye Bank branch on Adeola Hopewell, Victoria Island, where the accounts were opened and had obtained the files containing Patience’s information.

The source told our correspondent that the detectives had been able to establish a prima facie case of money laundering and forgery against Patience.

It will be recalled that as part of investigations into a former Special Adviser to the President on Domestic Affairs, Waripamowei Dudafa, the EFCC traced four company accounts to him all domiciled at Skye Bank.

Some of the directors of the company were also said to be domestic servants of Dudafa who did not know that any account had been opened on their behalf.

Shortly before the EFCC could arraign the suspects, Mrs. Jonathan deposed to an affidavit insisting that the monies belonged to her, a move which prompted the commission to beam its searchlight on Patience.

A detective at the EFCC said, “After three months of investigation, I can confirm to you that we are set to invite Patience Jonathan. We obtained the files from the bank and we realised that those accounts with the $15m were opened with fake identity cards, including driving licences.

“We took the cards and went to the Federal Road Safety Corps to verify if the cards were authentic. We found out that the cards were fake. So, this is not just money laundering but a clear case of fraud.

“If they had nothing to hide, why did they go to this length?”

While the companies have pleaded guilty, Patience insists that the money belongs to her but claims she does not know the companies.

In an affidavit, one Sammie Somiari deposed to on behalf of Patience, Mrs. Jonathan claimed that Dudafa helped Patience to open the bank accounts in 2010.

However, EFCC investigations revealed that the accounts were opened between 2013 and 2014.

According to Somiari, Dudafa had on March 22, 2010 brought two Skye Bank officers to meet Patience at home to open five accounts.

He, however, claimed that after the five accounts were opened, Patience later discovered that Dudafa opened only one of the accounts in her name while the other four were opened in the names of companies belonging to Dudafa.

Meanwhile, sources within the agency told our correspondent that the commission had been under pressure to drop the case as there are plans by Patience’s supporters to embark on a series of protests this week.

On Friday, scores of supporters of Mrs. Jonathan stormed the Port Harcourt zonal office of the EFCC asking the commission to stop probing her.

They insisted that Patience, who is also from Rivers State, was innocent.

The protesters, who were led by one Sara-Igbe Sukubo, a self-professed anti-corruption ambassador, said they were in the commission to express their unhappiness and submit their letter of protest over what he called ill-treatment of Mrs. Jonathan.

In his response, the South-South zonal head of the EFCC, Ishaq Salilu, told the protesters that the EFCC as a creation of law discharges its responsibilities within the ambits of the law.

He said, “The EFCC is a law-abiding organisation which discharges its duties not minding whose ox is gored. We do not shy away from our responsibilities. Where there is a case, we pursue it to its logical conclusion, if there is no case, there is none, we move to other things. The motto of the commission is ‘Nobody is above the law.’”

Posted by Unknown at 2:44 pm
Email ThisBlogThis!Share to TwitterShare to FacebookShare to Pinterest
Labels: NationalNews