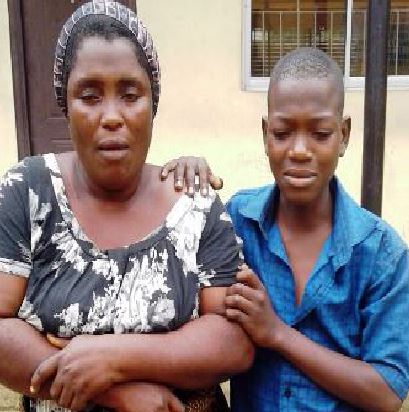 A mother of six, arrested by operatives of Lagos State Environmental and Special Offences Unit Task Force for using her 11-year-old son to beg, while pretending to be victims of a fire incident, did not show any sign of remorse, saying begging was a lucrative business.

The suspect, identified as Chinagoro Uwenke, 40, was arrested yesterday in Oshodi area of Lagos.

Uwenke was always seen in the company of her son, whose leg was usually in bandage, discovered to be stained with liquid, which several people believed was pus from untreated burns.

Luck, however, ran against them after operatives of the task force demanded to know the magnitude of the purported injury on the lad. When the bandages were removed, it was discovered to the astonishment of all that the boy had no injury at all. Both mother and son were then whisked away.

Preliminary investigation showed that the suspect had been engaged in the alms begging business for five years. She revealed, during interrogation, that she made between N3,500 and N5000 daily.

She said: “I live at Oloko-Dana, Ijora-Olopa area, in Onyingbo. I am from Abia State. Yes, my son is hale and hearty, but I took to begging because it is lucrative. I make more money at Oshodi than any other area because of the number of people that pass by daily.

“I withdrew my son, Sunny Uwenke, from school back in Abia and brought him to Lagos five years ago to use him to beg for alms. That is what most people do. This is because people take pity on children. My five other children are with my husband in Ata town, Abia State.

“What I do is to wrap his leg with bandage, after which I would pour GV and other liquid substance which will make it look as if it is an injury that refused to heal.

“I would then beg people to help me with money to take him to the hospital. Some will even give without me begging them.

“But I am appealing to government not to take me to court. If I am left off the hook, I promise to go back to the village and join my family.”

Chairman of the Task Force, Mr. Olayinka Egbeyemi, a Superintendent of Police, who confirmed the arrest, said there were several others like her on the streets of Lagos.

Posted by Lawrencia at 11:04 am
Email ThisBlogThis!Share to TwitterShare to FacebookShare to Pinterest
Labels: NijaDrama