Bishop Of Grantham, Nicholas Chamberlain, Become The First Church Of England Bishop To Say He Is Gay And In A Relationship 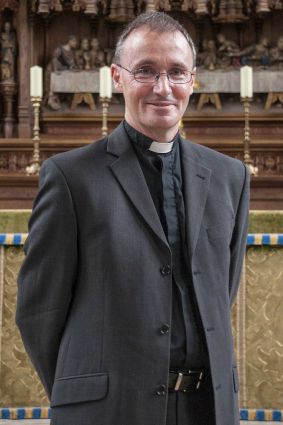 Bishop Nicholas Chamberlain, a suffragan in Lincoln diocese, was consecrated last year by Archbishop of Canterbury Justin Welby - who has said he knew about the bishop's sexuality.

He was in a "long-term and committed" relationship, Archbishop Welby said. Bishop Chamberlain says he obeys Church guidelines, which say gay clergy must remain celibate. The archbishop also said:

"His appointment as bishop of Grantham was made on the basis of his skills and calling to serve the Church in the Diocese of Lincoln.

"He lives within the bishops' guidelines and his sexuality is completely irrelevant to his office."
'Not secret'


A Church of England spokesman said: "Nicholas has not misled anyone and has been open and truthful if asked. The matter is not secret, although it is private as is the case with all partnerships/relationships."

Bishop Chamberlain's sexuality emerged in an interview with the Guardian, and it has been reported that he gave the interview because his private life was about to be exposed by a Sunday newspaper.

"It was not my decision to make a big thing about coming out," he told the newspaper.

"People know I'm gay, but it's not the first thing I'd say to anyone. Sexuality is part of who I am, but it's my ministry that I want to focus on."

Bishop Chamberlain said he had been with his partner for many years.

"It is faithful, loving, we are like-minded, we enjoy each other's company and we share each other's life," he said.

Asked about whether other bishops might follow his lead in openly declaring their sexuality, he said: "I really can only speak for myself. If I'm an encouragement to others, that would be great."

Bishop Chamberlain said the Church of England was "still at the beginning of a process of learning" about issues of sexuality, describing it as a struggle.

He said he hoped to be a "standard-bearer for all people as a gay man" and that he hoped he would be able to "help us move on beyond matters of sexuality".

He added that he hoped to be "judged by my actions as a parish priest, a bishop - and by the Lord ultimately".

Posted by Lawrencia at 8:16 am
Email ThisBlogThis!Share to TwitterShare to FacebookShare to Pinterest
Labels: InternationalNews