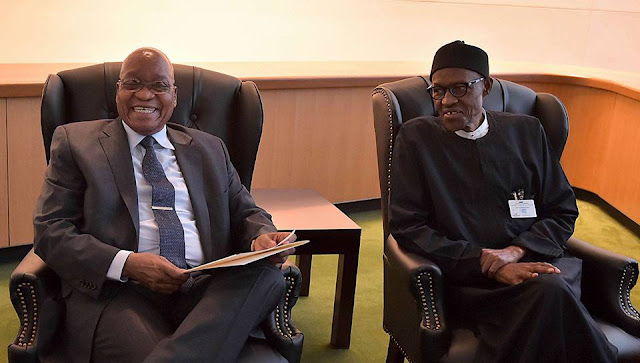 President Muhammadu Buhari has disclosed that advances being made against Boko Haram insurgents go beyond degradation through just force of arms.

Speaking at a bilateral meeting with President Jacob Zuma of South Africa, Monday in New York, on the sidelines of the 71st Session of the United Nations General Assembly, President Buhari said, "the de-radicalization process is also going on, and we are achieving some measure of success. Even suicide bombing is becoming rare, as the local people are themselves rejecting indoctrination by the insurgents."

The President assured existing and potential investors in Nigeria of adequate protection of their lives, investments and property, as the security situation in Nigeria is now very much better and conducive. 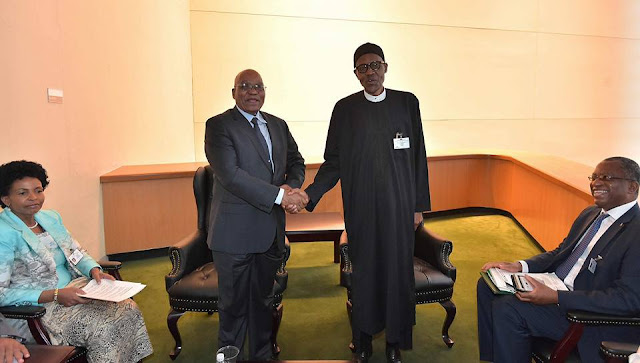 President Buhari said Nigeria was working hard to diversify the economy and expressed willingness to collaborate with South African businessmen especially in the areas of mining and agriculture, for the mutual benefit of the two countries.

In his remarks, President Jacob Zuma of South Africa recollected his visit to Nigeria earlier this year which he described as "very successful.” He added that he was interested in the promotion of economic and trade partnerships between the two countries.

At another bilateral meeting with President Macky Sall of Senegal, both President Buhari and the Senegalese President expressed their happiness at the good cropping season being experienced in their countries as it portends bumper harvests which will ultimately translate into an enhancement of the quality of lives of their people.

The two Presidents also reviewed the situation in Guinea Bissau and concluded that political leaders in the country need to make sacrifices to guarantee peace and development of the country.

Posted by Unknown at 8:36 am
Email ThisBlogThis!Share to TwitterShare to FacebookShare to Pinterest
Labels: NationalNews