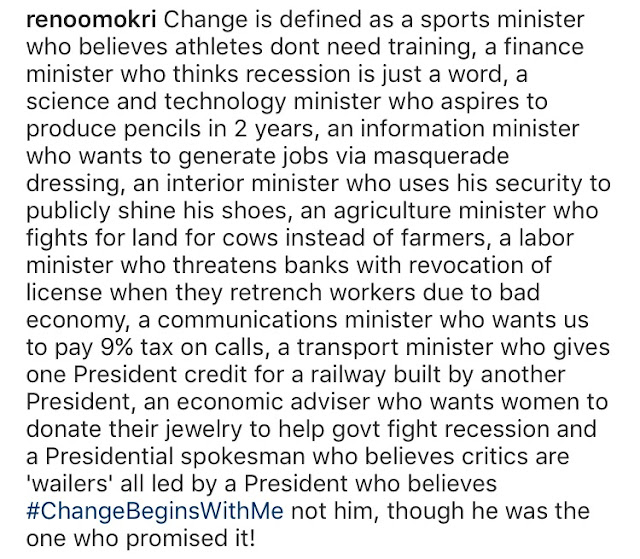 Change is defined as a sports minister who believes athletes dont need training, a finance minister who thinks recession is just a word, a science and technology minister who aspires to produce pencils in 2 years, an information minister who wants to generate jobs via masquerade dressing, an interior minister who uses his security to publicly shine his shoes, an agriculture minister who fights for land for cows instead of farmers.

A labor minister who threatens banks with revocation of license when they retrench workers due to bad economy, a communications minister who wants us to pay 9% tax on calls, a transport minister who gives one President credit for a railway built by another President, an economic adviser who wants women to donate their jewelry to help govt fight recession and a Presidential spokesman who believes critics are 'wailers' all led by a President who believes #ChangeBeginsWithMe not him, though he was the one who promised it!

Posted by Unknown at 7:53 am
Email ThisBlogThis!Share to TwitterShare to FacebookShare to Pinterest
Labels: NationalNews