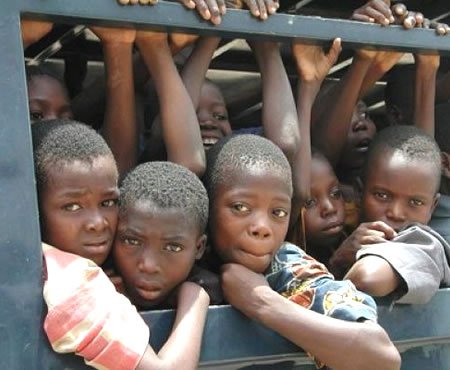 A Federal HighCourt sitting in Ibadan, Oyo State has sentenced 37- year-old Mr Idowu Folorunso and his 35-year-old wife, Mrs Titilayo Folorunso to 14 years imprisonment each, with hard labour, for procuring and facilitating the trafficking of a woman to Libya for prostitution.

The couple, who were arrested in Ibadan on January 12, by officials of the National Agency for the Prohibition of Trafficking in Persons (NAPTIP) following the receipt of a petition of suspected case of trafficking alongside complaints of the victim, lured the victim, who was a nursery school teacher in a private school, with the promise of a teaching job outside the country.

Spokesman of NAPTIP, Mr Josiah Emerole, confirmed the sentences in a statement on Wednesday, in Abuja.

It was gathered that the victim (name withheld) was Mrs Folorunso’s friend.

The victim, who was a nursing mother at the point of recruitment in May 2014, reported that the convicted couple had deceived her into travelling with the promise of getting a good job in Cairo, Egypt.

She was to be helped by the couple’s sister to secure a job.

Investigations however, revealed that the victim was rather taken to Tripoli, Libya, where she was forced into prostitution and all the money she earned were collected by a third party, who was still at large.

Delivering judgment on the case, Justice Joyce Abbdulmalik convicted the couple for procurement and  facilitation of foreign travels which promoted prostitution.

Both offences contravened sections 15 (a) and 16 of the Trafficking in Persons (Prohibition) Law Enforcement and Administration Act 2003 (as amended 2005).   They were, therefore, sentenced to seven years on each of the two counts with hard labour.

The sentence would, however, run concurrently.

Reacting to this, the acting Director-General of NAPTIP, Alhaji Abdulrazak Dangiri, commended the judge for a job well done and urged Nigerians to always be vigilant, as traffickers might be those close to them.

Meanwhile, in Ebunoluwa Bankole’s judgment, aside being sentenced to 30 years imprisonment for human trafficking, she is also to pay a fine of N1, 000,000 only for the procurement and exportation of young Nigerian women to Libya for prostitution.

Bankole, who was convicted on a six count charge for offences that contravene sections 13 (4b), 14(b) and 18 of the Trafficking In Persons (Prohibition) Enforcement and Administration Act 2015, bagged five years for each count. The sentence would however, run concurrently.

She was arrested and investigated by officers of the National Agency for the Prohibition of Trafficking in Persons (NAPTIP) following a petition dated 26th January, 2016 from a group of Solicitors and Advocates of Human Right, on suspected human trafficking activities being carried out by her, her daughter Lateefat Sanni and son-in-law Muritala Sanni, who are both still at large.

The said petition followed a report to the solicitors by two of the convict’s victims, who approached the solicitors for assistance in finding the whereabouts of their daughters having not heard from them for two weeks.

The petition reported that Bankole’s daughter and son-in-law who are based in Libya usually collected money ranging from the sum of N500, 000 to N1.5 million from their victims with promises of taking them to countries from where they could easily secure visas to either the United Kingdom of the United States of America.

Following Ebunoluwa’s conviction, NAPTIP has been charged not to relent in its efforts to arrest Lateefat Sanni and her husband Muritala Sanni who are reportedly still holding and exploiting Nigerian girls in Libya.

Meanwhile, prior to Bankole’s conviction, NAPTIP had secured the conviction of one Mojisola Olonade and Segun Taiwo Sholabi for obstructing NAPTIP officers while effecting the arrest of Lateefat Sanni who had sneaked into the country.

The obstruction, which led to the escape of the suspect is an offence contrary to section 32(2b) of the Trafficking In Persons (Prohibition) Enforcement and Administration Act 2015. They were sentenced to one year imprisonment each or a fine of N100,000 each.

Posted by Unknown at 4:23 pm
Email ThisBlogThis!Share to TwitterShare to FacebookShare to Pinterest
Labels: Crime