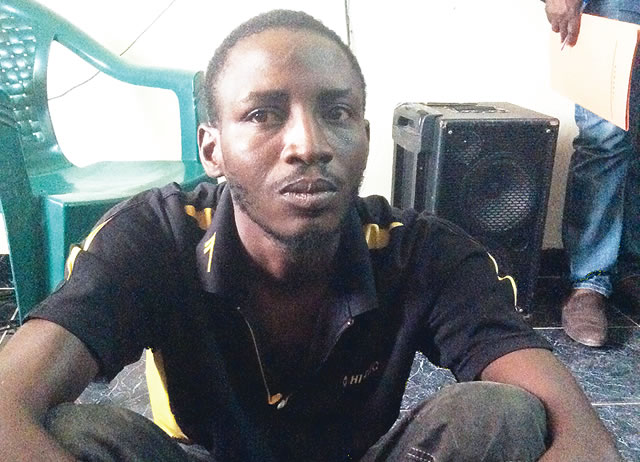 A graduate of Political Science, Jehu Kwasu, has narrated how he impersonated the Catholic Bishop of Sokoto Diocese, Bishop Matthew Kukah and defrauded prominent Nigerians of millions of naira.

He allegedly collected the sums for Internally Displaced Persons.

“I opened a Guaranty Trust Bank account in Bishop Kukah’s name. I registered a SIM card in my name, but used Bishop Kukah’s picture on my True Caller account, so that when I call, his picture would appear (on the recipient’s phone.)”

Kwasu, who is serving a two-month sentence in the Keffi Prison, admitted on Friday in Abuja that he realised over N5.7m.

Police sources said only N1.7m was found in his bank account, adding that the suspect spent most of the money he made on girls and hard drugs.

It was gathered that Kwasu, the son of late Anglican Bishop, James Kwasu, also exploited his father’s name, to extort money from the Katsina State Governor, Aminu Masari, when the latter was the Speaker, House of Representatives.

The 25-year old explained that he defrauded his victims by soliciting money on phone to cater to IDPs in the country.

The cleric’s son stated that he obtained a passport with the name, Mathew Hassah Kukah Jehu, and also opened an account with the GTB in the same name.

He said, “I called people on the telephone and told them I was Bishop Kukah. I used his picture on my True Caller account, so that when I called people, they would think he was the one talking with them.

“I also obtained a passport in Bishop Kukah’s name which I used to open an account with GTB. The money I realised was paid into the account and I used an Automated Teller Machine card to withdraw it.”

PUNCH Metro gathered that Kukah was alerted to the scam by some people close to him.

The cleric was said to have petitioned the police, which asked the bank to place a “no debit order” on the account.

Following his inability to withdraw from the account, Kwasu was said to have visited the bank to complain, where he was arrested.

Findings indicate that Kwasu had earlier been arrested and remanded in prison for impersonating Bishop Steven Akobe of the Anglican Diocese of Kabba, Kogi State, but was granted bail.

The police said Kwasu had also attempted to extort money from Senator David Mark, claiming to be Akobe.

“Mark said I should come for some money, so I sent my girlfriend. But she was arrested and I was taken to court and sentenced to two months imprisonment or N9,000 fine,” Kwasu stated.

It was gathered that the suspect, who had two female siblings, sold his deceased parents’ house in Kaduna for N10m and lavished the money on girls and a profligate lifestyle.

The Federal Capital Territory Commissioner of Police, Muhammad Mustafa, stated that Kwasu was arrested by the men of his command, after Kukah complained about his activities.

The CP said, “We received a petition from Bishop Kukah alleging that the boy had been impersonating him and extorting money from prominent people. So, my men went to work and were able to track the suspect and arrest him.  He is a habitual criminal and I would like to advise the public against responding to emails or phone calls from unknown persons requesting financial support for one cause or the other.”

Mustafa also called on the public to report every suspicious phone call and email to the police for investigation.

Posted by Lawrencia at 9:26 am
Email ThisBlogThis!Share to TwitterShare to FacebookShare to Pinterest
Labels: Crime