"I Am Grateful To God For Our RailwayAchievement Amongst Other Things" - Goodluck Jonathan Shades Buhari, Using A 2015 Article 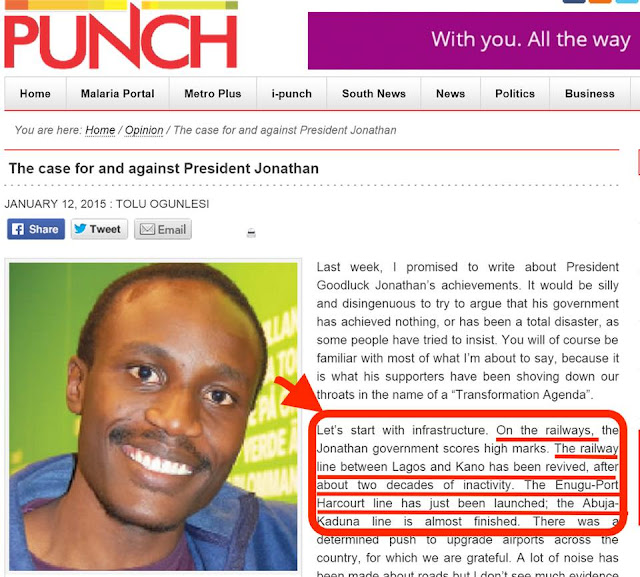 Today, former President Goodluck Jonathan posted this article written by Buhari's aide in 2015, as he disagreed with the president over claims that he inherited “no light, bad roads and no railway.”

Buhari made the statement, last week, in the U.S while briefing Nigerians that he met nothing on the ground after he took over as the president. He said:

“We got into trouble as a country because we did not save for the rainy day. For example, between 1999 and 2015 when we produced an average of 2.1 million barrels of oil per day, and oil prices stood at an average of $100 per barrel, we did not save, neither did we develop infrastructure.

Suddenly, when we came in 2015, oil prices fell to about $30 per barrel. I asked, ‘Where are the savings?’ There were none. ‘Where are the railways, the roads, the power?’ None. I further asked, ‘What did we do with billions of dollars that we made over the years?’ They said we bought food.”

But in a Facebook post today, GEJ, responded by saying he was proud of his achievements, especially in the area of rail construction. He made reference to a piece written by Tolu Ogunlesi, who now serves as the Special Assistant on Digital/New Media to Pres. Buhari.

Ogunlesi had praised GEJ's achievements in a piece entitled, ‘The case for and against President Jonathan.’ In the piece, he said: “Let’s start with infrastructure. On the railways, the Jonathan government scores high marks.

The railway line between Lagos and Kano has been revived after about two decades of inactivity. The Enugu-Port Harcourt line has just been launched; Abuja-Kaduna is almost finished. There was a determined push to upgrade airports across the country, for which we are grateful.”

Posted by Lawrencia at 3:52 pm
Email ThisBlogThis!Share to TwitterShare to FacebookShare to Pinterest
Labels: NationalNews