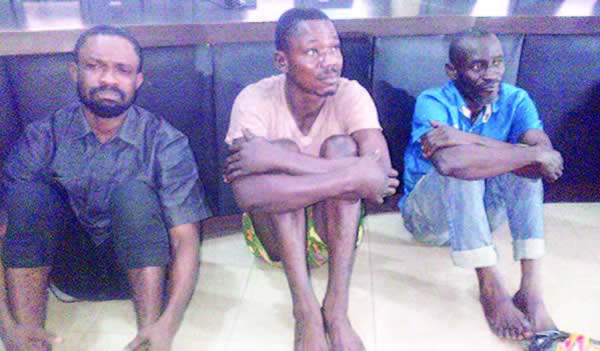 A 46-year-old truck driver, Obi Ebong, who was arrested by the police in the Ikotun area of Lagos State, says he went into robbery to raise the money for his sister’s burial.

Ebong, a truck driver, was arrested by the Zone 2 Police Command, Onikan, for armed robbery and murder, which he and seven others allegedly carried out in the Ajao Estate area on May 28.

It was gathered that apart from Obong, the other suspects are Aniete Akonnah, Promise Friday, Happiness Promise, Silas Effiong, Monday Udoh, Ifedinachukwu Iwuola and Sumaila Umar.

PUNCH Metro learnt that on August 23, at about 1am, the police received information that the robbery suspects broke into a warehouse in the Ikotun area of Lagos State.

It was gathered that the gang stole aluminum sheets, cartons of tomatoes and paper reams worth N22m from the warehouse.

They were reportedly arrested by the Zonal Anti-Kidnapping Unit while they were about escaping from the area.

Our correspondent gathered that the eight suspects thereafter confessed to robbing the warehouse on Ajao Estate, where they killed one of the security men, whose name had yet to be ascertained.

According to the police, tinned fish and cans of tomatoes, as well as motorcycle and bicycle spare parts were recovered from the suspects after their arrest.

Speaking with PUNCH Metro, Ebong, who hails from Akwa Ibom State, said his role was to load the goods into his truck, adding that he was not aware that the gang members shot dead a security man during the operation.

“I was planning to use the money for my sister’s burial. My elder sister died around that time, and I was looking for money for the burial. That was why I decided to go with the gang.”

Friday, 34 years old, also from Akwa Ibom State, said he had participated in two operations with the gang.

He said, “It was Owen who led the gang. I worked as a bricklayer and I was invited by a friend to the robbery. I was asked to bring my truck.

“I have participated in only two operations. I did not know the security man was killed. I am married with two kids. I live in the Ikotun area of Lagos State. My wife did not know I went to rob.”

The Assistant Inspector-General of Police, Abdulmajid Ali, said the suspected robbers would be charged to court at the end of investigations.

He said, “They have confessed to robbery and murder. They will be charged to court at the end of investigations.”

Posted by Lawrencia at 7:38 am
Email ThisBlogThis!Share to TwitterShare to FacebookShare to Pinterest
Labels: Crime