"I Started Printing Fake Currency To Take Care Of My Three Children Who Are In The University" - Explains 68-Year-Old Former U.K Resident 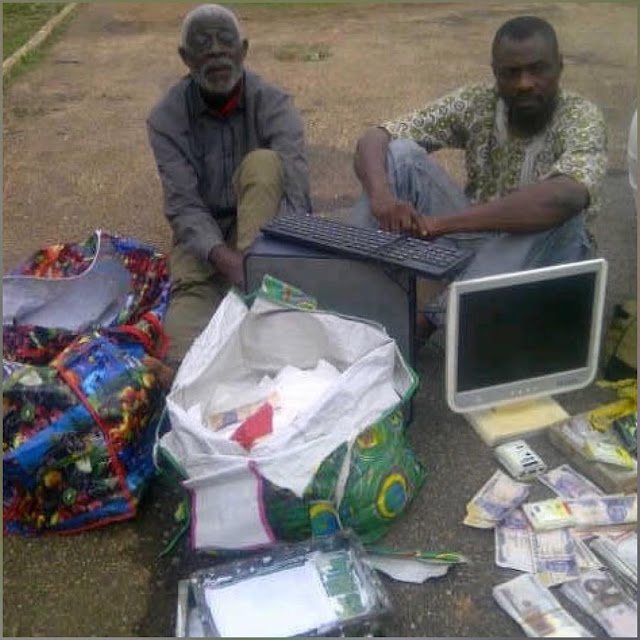 A 68-year-old, former British resident: Femi Faweya, was Tuesday paraded by the Oyo State Police Command along with an accomplice for procuring a currency printing machine with which he had duped many people.

Parading the two suspects at the Eleyele Police Headquarters, Ibadan, along with 39 others linked to various criminal activities like kidnapping, hijacking of vehicles and armed robbery, the Police Commissioner, Mr Sam Adegbuyi said that there would no resting space for criminals in the Pace Setter State until they turned a new leaf.

Faweya, who claimed to be a former Grade 2 teacher, confessed that he ‎went into the crime in vengeance for the action of a friend who duped him earlier of N200,000. He also said he needed money to take care of his three children who were in the university, but he had no other means of generating funds for their education.

He said he got the machine from an accomplice, Segun Fayose (42) and had been printing N500 and N1,000 notes with it in order to recoup the money he was duped earlier by another person.

Speaking with ‘New Telegraph’, the fake currency printer said: “I am Femi Faweya. I live at Ijokodo in Ibadan here. I used to photocopy the materials with a photocopy machine. I was introduced into the business three years ago by Bayo but he is late now. He duped me of N200,000 without doing anything for me. About two months ago, someone gave me a printer for the business. I was printing N500 and N1,000 notes to recoup my lost money. I don’t usually sell the currency, I just venture into the business so that I can recover my money back.

“I was a Grade II teacher, I taught for 10 years. I retired to work in Britain for three years. I had problems where I was working and that was how I was repatriated back to Nigeria. I have three children in the university and since there is no job presently, that is why I think I can make two ends meet by doing this kind of business.

“I was arrested inside my house here in Ibadan. These are the chemicals and the printing machine that I used in printing the fake currency.”

Posted by Lawrencia at 7:42 am
Email ThisBlogThis!Share to TwitterShare to FacebookShare to Pinterest
Labels: Crime