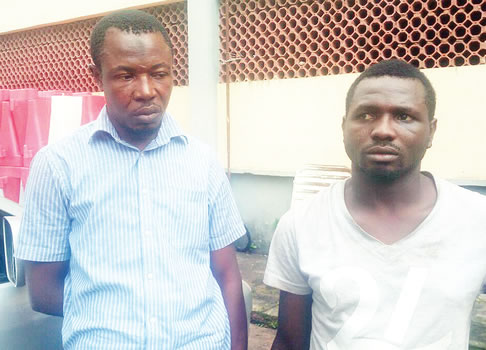 The police in Lagos State have arrested a 26-year-old undergraduate, Ademola Adebayo, for allegedly defrauding seven ladies he met on Facebook.

Adebayo, a 400-Level student of Computer Science, allegedly lured the ladies by uploading some rich pictures on Facebook, and asking his victims to meet him at a location, usually a hotel on the pretext that he had deals for them.

PUNCH Metro gathered that when the ladies showed up at the agreed location, the suspect would dispose them of their phones and other valuables.

The police alleged that Adebayo worked with an accomplice, 35-year-old Toheeb Fetuga, who had also been arrested.

It was learnt that the suspect was arrested by the Special Anti-Robbery Squad, Ikeja, where one of the victims reported the matter.

Adebayo told PUNCH Metro that he had defrauded seven ladies of their valuables.

He said, “One of the ladies I defrauded was Rita. She came to a hotel in the Oyingbo area. We had met on Facebook and I agreed to do a deal with her. She was a woman willing to have a sexual affair with me for money.

“I invited her to the hotel and asked how much she would take. She said $1,000, and I said it was okay. I collected her phone. I asked her to come for the money at a hotel in the Victoria Island area. So, she believed me and left.

“I checked the contacts on her phone and that was where I got the contacts of other ladies I defrauded. I was trying to lure another friend of hers when I was arrested. I have done it to seven ladies. I usually meet the young women on Facebook, and it is either I add them or they add me.

“I usually uploaded rich pictures on Facebook, which attracted them to me. Fetuga was the one I usually gave the valuables to sell. He sold each of the phones for N6,000.”

Fetuga, on the other hand, said although Adebayo brought the phones to him, the undergraduate lied to him that the owners were badly in need of money.

He said, “He came to me that he wanted to sell the phones. When I asked him where he got the phones from, he said some ladies in his school were in need of money to complete their projects and examinations.

“He had come about seven times and I gave him about N6,000 for each of the phones. We usually met at different places. He would call and say we should transact business.”

The Lagos State Commissioner of Police, Fatai Owoseni, said investigations were ongoing into the matter.

Posted by Unknown at 7:34 am
Email ThisBlogThis!Share to TwitterShare to FacebookShare to Pinterest
Labels: Crime