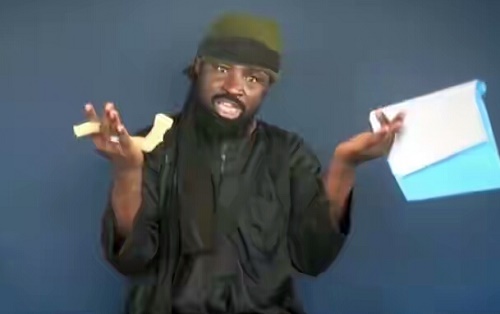 The embattled leader of jihadist group Boko Haram, Abubakar Shekau has resurfaced. He resurfaced in a video posted online today rejecting assertions by the Nigerian army that he had been seriously wounded.

"You have been spreading in the social media that you injured or killed me. Oh tyrants, I'm in a happy state, in good health and in safety," he said in the 40-minute video released on YouTube dated September 25.

It will be recalled that the Nigerian army had on the 23rd of August said that Shekau had been seriously wounded in the shoulder in an air raid in which several commanders were killed. The army's claim was however bolstered when Boko Haram released a video on September 13 without Shekau in it. But now he claims to be back.

Posted by Lawrencia at 2:30 pm
Email ThisBlogThis!Share to TwitterShare to FacebookShare to Pinterest
Labels: NationalNews