Kylie Jenner Surprises Tyga With Brand New $300k Bentley After She Hid His Ferrari, Which Was Reportedly 'Repossessed'

On Wednesday it was reported that Tyga's Ferrari was repossessed while he and Kylie were at a Bentley dealership in Calabasas, California.

According to TMZ, the rapper reportedly missed a number of payments on the car's lease and a repo man with a spare key took it while the pair were shopping for yet another luxury vehicle.

But it turns out to be false as Kylie Jenner surprised Tyga with a brand new $300,000 Bentley and revealed she was the one who hid his Ferrari while she went alone to pick out the Bentley.

After Kylie gifted him with the very expensive set of wheels, the pair both took to Snapchat to reveal it had all been a big prank.

"When ur lil baby cops u the Bentley truck and hides your Ferrari. Guess I can't be mad [sic]," Tyga said in his video.

While Kylie shared a Snapchat clip of the thrilled rapper jumping about as she handed over the keys to his new toy.

"The blogs almost ruined it, they said me and T were at the Bentley dealership when really it was only me. 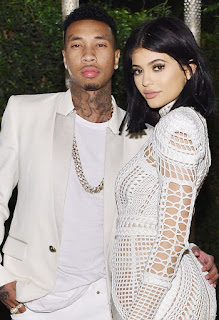 Posted by Lawrencia at 10:17 am
Email ThisBlogThis!Share to TwitterShare to FacebookShare to Pinterest
Labels: Hollywood