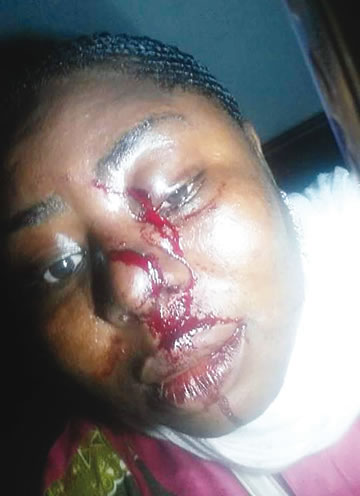 A 27-year-old beautician, Latifat Adeyemi, has been battered by her aunt’s husband, Rasak Alabi, aka Alfa, for allegedly turning on an air conditioner in their house in Solebo, Ikorodu area of Lagos State.

Alabi reportedly claimed that the gadget consumed excessive power, and allegedly hit the victim with a spanner in the face and flogged her with a piece of cable, which led to her admission in a private hospital.

Punch was told that for the past 10 years, Latifat and her grandma had been living in a bungalow at the back of the house on Ile Eye Street, which was reportedly built by Alabi’s wife.

It was learnt that Alabi, who had separated from his wife for the past 20 years, moved into the building in 2015 after reconciling with his wife, a nurse, who is based in the United States of America.

Our correspondent was told that since Alabi moved into the house, there had been misunderstandings, which had led to the eviction of some relatives in the house.

Latifat said she was staying in the house because she had to cater to her grandma.

She said, “My aunt is a nurse and she is based in the US. She put her mother in the house and asked me to cater to her. Grandma and I had been living in that house for over 10 years.

“Alfa (Alabi) and my aunt separated over 20 years ago. They never had a child together. But last year, they reconciled and the family said we needed a man in the house; so he moved into the house. He evicted our last born, but I stayed behind because of grandma.

“Last week Friday, when I returned from Surulere around 7pm, I saw that he had broken into my apartment and removed the AC there. He said the AC consumed too much power.

“I made a call to my uncle and I told him that I would be packing out of the house because I was fed up. As I turned around, he hit me in the eye severally with a spanner and as I ran off, he picked a cable piece and flogged me.”

She said she went to the Ipakodo Police Station to report the incident, adding that operatives who followed her to the house met the gate locked.

Latifat said the police turned back when they could not gain entrance.

Her half-sister, Rasheedat, said there had been disagreement between Alabi and Rashidat in the past, adding that the AC was only an excuse for the suspect to chase her out of the house.

“This is the only girl left in that house because of grandma. He had been finding excuses to send her away,” she explained.

Raheedat said shortly after the incident, Alabi reported to a vigilance group, Onyabo, that his car had been vandalised by Latifat’s siblings.

He was also alleged to have later gone to the Igbogbo Police Station to make other accusations.

Raheedat said the police called for a peace meeting between the parties, but the suspect rejected the move and ejected the grandma from the house.

“The old woman, who had left her husband’s house for the past 30 years, had returned to the same place again,” she added.

Alabi’s phone rang out many times when our correspondent called him.

He had yet to respond to a text message sent to his phone on Saturday.

The Police Public Relations Officer, SP Dolapo Badmos, confirmed the incident, adding that the suspect had been declared wanted by the police.

“The suspect is evading arrest, but we will get him,” she added.

Posted by Unknown at 12:01 pm
Email ThisBlogThis!Share to TwitterShare to FacebookShare to Pinterest
Labels: Crime