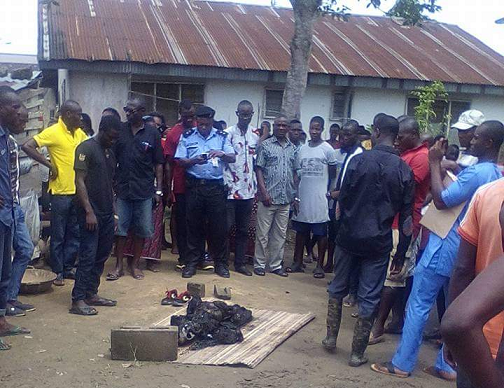 A young man has allegedly burnt his mother-in-law to death while his brother-in-law who was severely burnt is fighting for his live after their son-in-law set fire on their building at Isampou in Ekeremor LGA in Bayelsa state.

According to an eyewitness, the man allegedly poured fuel on the room of his mother-in-law thinking his wife was sleeping in her mother's room.

It was alleged the wife left him some days ago saying that she does not want to marry him anymore. The wife was living with the alleged killer at Bomadi, Delta state before she left for her mother's house at Isampou, Bayelsa.

As at the time of the incident she was not sleeping in her mother's room. The man who burnt the house is said to have come from Ndoro community in Ekeremor, Bayelsa. The shocking  incident happened on Sunday, August 28.

Posted by Lawrencia at 12:18 pm
Email ThisBlogThis!Share to TwitterShare to FacebookShare to Pinterest
Labels: Crime