Out of Love! How Love Died Between Genevieve Nnaji And Her Lover, Ugochukwu Udezue 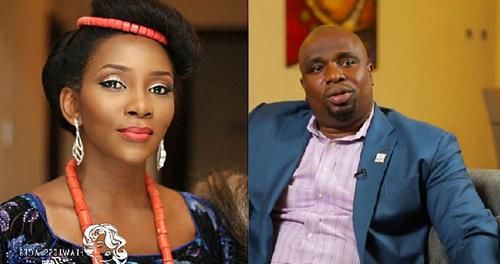 A mistress should be like a little country retreat near town, not a place to dwell in constantly, but only for a night and a chance away from the house. But top actress, Genevieve Nnaji did not know that. Maybe she knew but was simply too carried away to give a hoot about the truism. Whatever, truth is she has learnt the hard way and has definitely moved on with her life.

Apparently, their mutual attraction has run its full course and has thus flickered out like a dying firelight. According to HPRtv; “Nollywood actress Genevieve Nnaji has lost her only chance of marrying this year because her secret lover has called off their wedding. Unknown to many, the pretty Nollywood single mother sparked off a secret romance with Ugochukwu Udezue, a wealthy NBA basketball agent based in Denver Colorado last year. He reportedly proposed to her around the time she was seen flaunting a huge engagement ring on her official Instagram page.

Miss Nnaji and Mr Udezue were supposed to get married in Milan Italy about two weeks ago but the groom cancelled the wedding at the last minute and returned to Amsterdam, dumping the actress and her guests. On why he cancelled the wedding at the last minute, Udezue reportedly told his friends that he doesn’t trust Miss Nnaji after she chose to make the wedding private. Secondly, his father has refused to give his blessing because of Genevieve Nnaji’s suspicious demand of not wanting close family members at the wedding. It was further disclosed that Ugo’s dad also refused to attend the event nor give his blessing. Months before the wedding, Genevieve Nnaji reportedly begged Udezue to keep the wedding ceremony a low-key one. She even went as far as not telling any member of her family nor her colleagues”.

Posted by Unknown at 1:09 pm
Email ThisBlogThis!Share to TwitterShare to FacebookShare to Pinterest
Labels: Gists