Photo: NDLEA Arrests Two Men On The Nigeria-Brazil Route, Recovering About 700 Of Cocaine 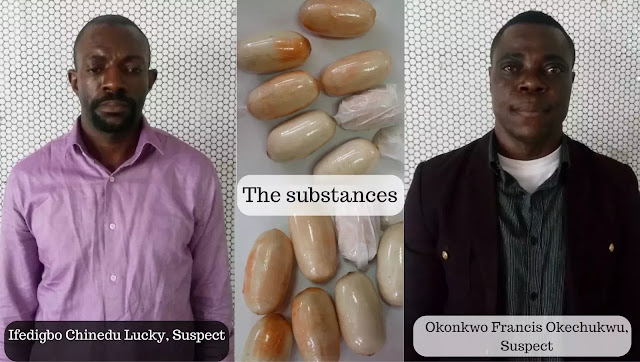 A man recently arrested by officials of the National Drug Law Enforcement Agency (NDLEA) at the Murtala Mohammed International Airport (MMIA), in Lagos had a sob story to tell. The NDLEA officials made a twin arrest on the Nigeria-Brazil route, recovering about 700 grammes of powdery substance that tested positive for cocaine from the two suspects during the inward screening of passengers on a Royal Air Maroc flight from Sao Paulo, Brazil through Casablanca, Morocco.

According to The Nation, the suspects had inserted seven wraps of cocaine each weighing 350 grammes into their alimentary canals to evade arrest. Ahmadu Garba, the NDLEA commander at the Lagos airport, gave the names of the suspects as Okonkwo Francis Okechukwu, 44, and Ifedigbo Chinedu Lucky, 37. “Preliminary investigation revealed that both suspects planned and executed the unlawful act together. They inserted seven wraps of cocaine each into their bodies weighing 350 grammes,” the commander stated. One of the suspects, Okonkwo Francis Okechukwu said that he accepted to smuggle drugs out of frustration and as a means of returning from Brazil. He said: “I was stranded in Brazil, where I worked as a waiter in a restaurant for two years. Life was awful as I was struggling daily just to feed myself. When I was contacted to smuggle cocaine to Nigeria, I was very happy because it was an opportunity to return home.

My sponsor also promised to pay me half a million Naira with which I had planned to start a business.” He is married with two children and hails from Enugu State. The second arrested man, Ifedigbo Chinedu Lucky, had also spent two years in Brazil described his arrest as ill-luck. “I am a business man. I import female shoes from Brazil since 2014. “This arrest is just bad luck for me because I was already calculating my profit from the deal,” the 37 year-old suspect stated. He is single and hails from Anambra State. Muhammad Mustapha Abdallah, the chairman and chief Executive of NDLEA, said that the Agency will not relent in the fight against drug trafficking.

“NDLEA is committed to the fight against narcotic production and trafficking. Brazil is a source country for cocaine and I am glad with the high level of vigilance on the route resulting in several arrests and seizures. “It is however sad that the suspects could insert narcotics into their alimentary canals in utter disregard of the health consequences. The suspects will be arraigned soon,” Abdallah stated. Meanwhile, a Nigerian man was recently sentenced in Dubai after he was caught with 100 capsules of cocaine in his stomach. According to Khaleej Times, the Nigerian was caught at Dubai International Airport in April. A policeman who was present at the operation room narrated how doctors retrieved the cocaine kept inside 100 capsules from the suspect’s stomach. “I was assigned to stand guard on the accused at the hospital. He had just been referred by the airport police officers after he was suspected of smuggling capsules containing drugs in his stomach. “As many as 100 capsules containing drugs were found. I seized and handed them over to the anti-narcotics department,” he said.

Posted by Lawrencia at 2:10 pm
Email ThisBlogThis!Share to TwitterShare to FacebookShare to Pinterest
Labels: Crime