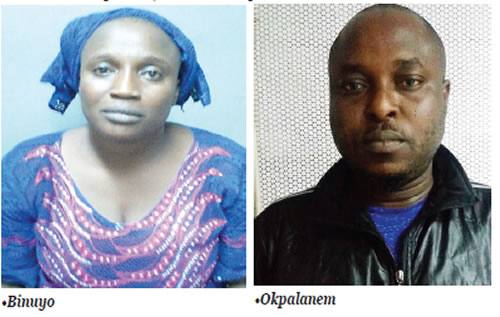 Not long after she was nabbed at the Nnamdi Azikiwe International Airport, Abuja, during the outward screening of passengers on an Emirate flight to Medina through Dubai, she excreted 76 pellets of cocaine.

The NDLEA commander at the Abuja airport, Hamisu Lawan, said the suspect will remain under observation until the drugs are completely expelled.

Meanwhile, the NDLEA also arrested a 37-year-old father of three at the Murtala Muhammed International Airport, Lagos with seven wraps of cocaine in his anus.

The suspect, Henry Okpalanem, was on his way to China, when he was nabbed during the screening of passengers about to board an Ethiopian Airline flight to Hong Kong through Addis Ababa.

The NDLEA spokesperson, Mr. Mitchell Ofoyeju, said the agency’s officials practically saved the suspect from an impending execution in China had he left the country successfully.

Saturday PUNCH learnt that the Imo State indigene inserted 355g of cocaine in his anus but was forced to excrete the drug after being apprehended.

“He was travelling on a Malian passport even though he is from Imo State. The name on his passport is Diara Sauduo while his Nigerian name is Henry Okpalanem, Garba said.

It was learnt that the suspect had lived in China for over two years before his arrest.

In his statement, Okpalanem, said he knew importing drugs into China was a capital offence, which could earn him execution.

“I thought I could smuggle the drug successfully. Maybe, I was caught in Nigeria because execution is not my destiny,” the father of three said.

NDLEA Chairman, Col. Muhammad Abdallah (retd.), said the suspect must understand that his arrest had nothing to do with his “colourful destiny.”

“He should take responsibility for his reckless action. He committed a criminal offence and he should be prepared to face the legal consequences. I am glad that we prevented him from untimely death and also protected the image of our country,” he stated.

He, however, called on the public to join the agency’s anti-narcotics campaign.

Posted by Lawrencia at 8:17 am
Email ThisBlogThis!Share to TwitterShare to FacebookShare to Pinterest
Labels: Crime