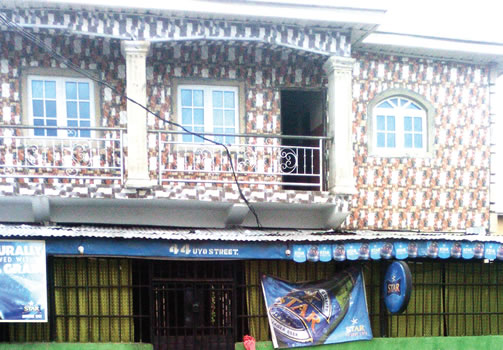 There was chaos on Uyo Street, Umuahia, Abia State, on Wednesday, after two guests were discovered dead and six others unconscious.

Although the cause of the incident had yet to be ascertained as of press time, it was learnt that those unconscious, which included the manager of the brothel, had been rushed to the Federal Medical Centre, Umuahia.

A source told our correspondent that the brothel, popularly called 50-50 Bar, usually hosted men who came to meet prostitutes at night.

The source, however, added that some occupants of the brothel raised the alarm as early as 8am that the manager was unconscious. The alarm drew residents to the scene.

He said, “It was the shout of the prostitutes that got our attention. By the time we got there, the manager was already unconscious, so we informed the police.”

The source explained that the owner of the brothel, simply identified as Madam 50-50, had yet to be seen since the incident happened.

He said, “We got information that people died at the brothel. When we got there, we saw two lifeless bodies and six others, who were unconscious. The remains of the deceased have been deposited in a mortuary, while those unconscious are currently receiving treatment.”

He called on residents of the area to remain calm, saying the homicide section of the State Criminal Investigation and Intelligence Department was investigating the cause of the incident.

Posted by Unknown at 3:16 pm
Email ThisBlogThis!Share to TwitterShare to FacebookShare to Pinterest
Labels: NijaDrama