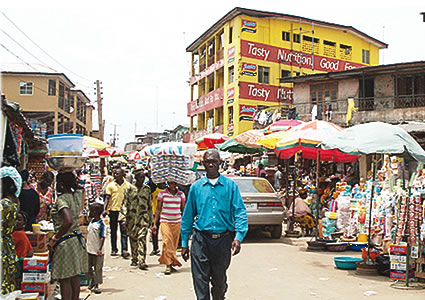 There was confusion at Ojuwoye Market, in the Mushin area of Lagos State on Saturday after a suspected female kidnapper was nabbed by residents.

The suspect would have been lynched but for the intervention of policemen from the Olosan division. It was learnt that the suspect had refused to disclose either her name or address.

PUNCH Metro learnt that the mother of the children, Modinat, a trader in the market, had laid the children, identified as Hammed Rasheed (six years old) and Farida Raheed (two years old), on the floor.

She was reportedly attending to a customer when the suspect took them away.

Our correspondent was told that a resident, who knew the mother of the children, challenged the suspect and raised the alarm when she could not give a satisfactory response.

A witness, Saheed Bayedun, said, “The children’s mother is a trader in the market. She left the children to attend to a customer. The kidnapper, who is about 22 years old, sneaked in and took them away before the mother suspected anything.

“She used a piece of cloth on the floor to strap the younger girl, Farida, to her back, and held Hammed by the hand. She was escaping from the vicinity when someone challenged her.

“The person raised the alarm when she couldn’t give a satisfactory response. A mob gathered and rescued the children before beating her to a pulp.

“She asked for palm oil, but nobody gave her. She later confessed that there were six of them recruited to kidnap children. She said they all came from Osogbo, Osun State, and were mandated to abduct eight children each. She said she had already abducted six children and was about getting the remaining two when she was caught.”

She said, “At about 12pm on Saturday, two children were allegedly abducted by the suspect at Ojuwoye Market. However, the mother alerted the police. The kidnapper was trailed and arrested with one of the victims on her back. They were rescued and reunited with their family. The suspect, who refused to give her name and address, is now in police custody and undergoing interrogation.”

Posted by Lawrencia at 8:40 am
Email ThisBlogThis!Share to TwitterShare to FacebookShare to Pinterest
Labels: Crime