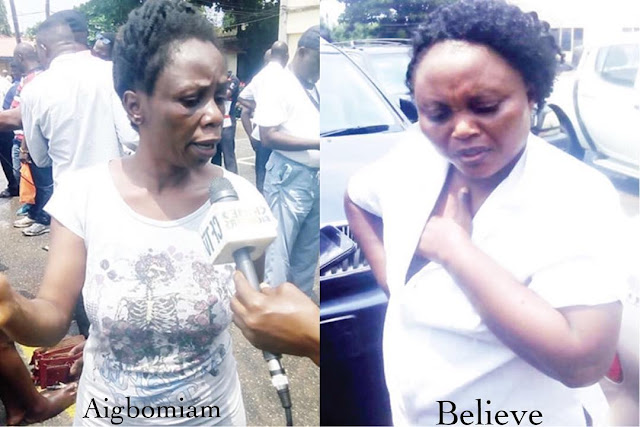 The Lagos State Police Command has arrested a Ghanaian, Enyolam Believe, for allegedly kidnapping her niece in the Ikotun area of the state.

PUNCH Metro learnt that Believe, who had been living in Lagos for the past 17 years, conspired with her friend, Agatha Aigbomiam, to commit the crime last Tuesday.

The eight-year-old victim was alleged to have been kidnapped on her way to school and taken to Ogun State by Aigbomiam.

The victim was said to have raised the alarm which drew the attention of residents, leading to the arrest of both suspects.

A police source said 43-year-old Believe and the victim’s mother had searched for the child, including reporting a case of missing person at a police station.

He said, “The suspect and the girl’s mother are sisters. Believe, however, colluded with her friend, Aigbomiam, to abduct the girl so that she could make money from the mother.

“Their plan was that the friend would kidnap the child and hide her somewhere in Ogun State, while she would negotiate the ransom with the mother on the phone.

“When the girl went missing, the girl’s mother called her and they both searched for the girl. She even suggested that they should report the case to the police. The mother never suspected that she was behind the kidnap.”

The source said while people were looking for the girl, the suspect was also trailing the movement of her friend and the victim on the phone.

He said the kidnapped girl, while in captivity, raised the alarm that Aigbomiam was not her mother and called for help from some Ogun residents, who came to her aid.

The matter was said to have been reported to a community leader, who invited the police.

The source said, “When the police discovered that Aigbomiam was not alone in the crime and she was receiving calls from Believe, they decided to play along. They asked her to invite Believe to Ogun State.

“It was when she arrived that the police arrested her. The case was subsequently transferred to Lagos State where the offence was committed. That was where the mother of the girl saw that her own sister was behind her ordeal.”

The suspects, who were paraded before journalists at the police command headquarters in Ikeja on Thursday, confessed to the crime.

Believe said she hoped to make N30,000 from the kidnap, adding that she needed the money for a business.

She said, “I have my own children. I needed money badly that time and I thought of different ideas, which didn’t work. So, I decided to kidnap my sister’s daughter and demand N30,000 ransom from her. I involved my friend because I didn’t want to be the one to take the girl from school. I don’t know what came over me.”

Aigbomiam, a 42-year-old trader from Ekpoma, Edo State, said Believe asked her to kidnap the victim after she returned from a surgery in Benin.

“She said she wanted to use the girl to collect some money from her sister. She just showed me the girl’s school and I kidnapped her around 7.30am on Tuesday, while she was going to school. I took her to my relative’s house in Ogun State. I was stupid for doing such a thing.”

The state Commissioner of Police, Fatai Owoseni, while advising parents and guardians to be vigilant over their children and wards, said the suspects would be arraigned in court at the end of investigation.