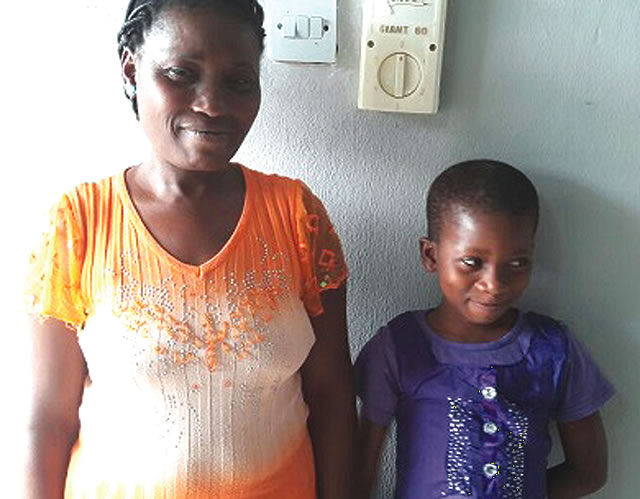 A 35-year old mother of eight, Margaret Effiong, has reunited with one of her kids, Nkoyo, who was given out as a housemaid to a runaway child trafficker in Calabar.

Nine-year-old Nkoyo and another child identified as Patience Stephen (eight) were on September 16, 2016, rescued in Calabar by a lawyer and child rights activist with Basic Rights Counsel, Mr. James Ibor, following a tip-off.

The two victims, who were hawking coconut on the streets of Calabar, had bruises on their body when they were rescued. They were severely assaulted by one Eka Obong, who is on the run.

After rescuing the abused kids, Ibor sent the pictures on the social media platform, Facebook, where it went virile and someone identified one of the kids.

Narrating how he rescued the victim to Southern City News, Ibor said he was able to trace the mother of one of the abused kids to Ikot-Effanga community in Akpabuyo Local Government Area of the state.

The mother of Nkoyo, Mrs. Effiong, who spoke in native dialect, admitted that she had eight children but had to send most of the kids to work for people as housemaids because she had no money to send them to school.

Mrs. Effiong, who disclosed that her husband died five years ago, said she was into small scale farming and petty trading to provide food for the three children with her.

Ibor, in his narration said, “After the post on Facebook, someone who is the distant relation of one of the kids (Nkoyo) identified her. He had to call our numbers, which were included in the post.

“We traced the mother, who is a very poor woman and mother of eight.  She admitted that she gave out her kid as housemaid to someone in Calabar.

“But we are not going to press for charges against her. All we shall do is to counsel her so that she recovers all her kids. She already has three of the kids back with her.

“She felt sober when she saw her daughter and the daughter (Nkoyo) also felt happy when she saw the mother. We are encouraging her that she could raise a happy home even in her poor state.”

When contacted, the state Police Public Relations Officer, Irene Ugbo, said she was not aware of the matter.

Posted by Unknown at 8:50 am
Email ThisBlogThis!Share to TwitterShare to FacebookShare to Pinterest
Labels: Gists