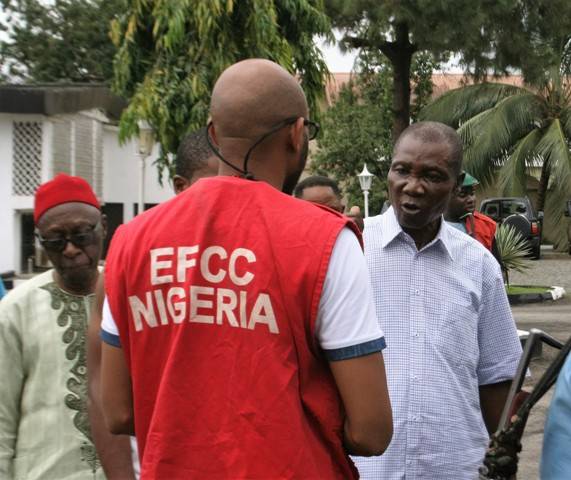 Apugo pleaded not guilty to the charges prompting the prosecution led by Joshua Saidu to apply for a trial date while praying that the defendant be remanded in prison custody pending trial.

But the defence counsel, R.M Udechukwu (SAN) pleaded with the court to allow the accused to continue with the administrative bail granted him by EFCC. He had unsuccessfully argued against the arraignment of his client based on a purported pending appeal, challenging the jurisdiction of court.

The court however granted the defendant bail in the sum of N10,000,000.00 (Ten Million Naira Only) and two sureties in like sum. The two Sureties, the court insists must be senior civil servants not less than deputy director with one of them having a landed property within Umuahia metropolis who must deposit the title documents with the court registrar.

The judge further directed that both counsel, together with the court registrar ,shall also verify the sureties and ordered Chief Apugo to be remanded in prison custody pending fulfilment of bail conditions.

Earlier, Apugo had stormed the court with several security vehicles and not less than six armed mobile policemen from the Special Protection Units of the Nigeria Police, a development prompting the judge to demand that they move out of the court premises citing security concerns.

Chief Apugo’s arraignment was sequel to his arrest on Friday September 30, 2016 by EFCC following a warrant issued by the court which considered his numerous attempt to evade taking a plea on the charge preferred against him. He was alleged to have fraudulently sold six (6) plots of land valued at N36.000,000 (Thirty Six Million Naira Only) belonging to the Nigeria Railway Cooperation located at Umunwulari Nkata Ibeku layout, Planning Scheme Umuahia.

The matter has been adjourned to 17th and 18th November for trial.

Posted by Unknown at 10:45 am
Email ThisBlogThis!Share to TwitterShare to FacebookShare to Pinterest
Labels: Crime