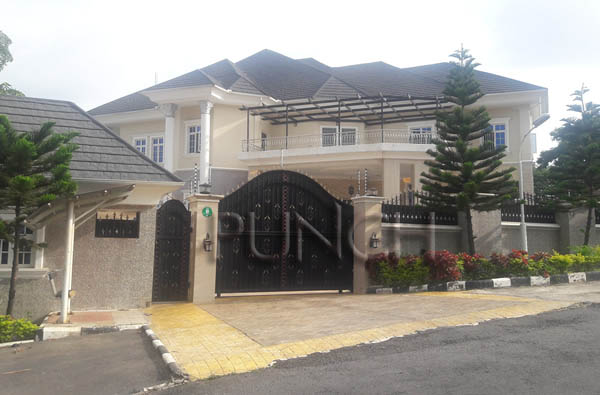 The EFCC on Tuesday, October 11, 2016 presented its sixth prosecution witness, PW6, Air Commodore Mohammed Lawal Sini, in the trial of Air Chief Marshal Alex S. Badeh (rtd) to shed more light on how the sum of N558million Nigerian Air Force funds was converted to personal use while Badeh held sway as Chief of Air Staff. He is facing a 10-count charge bordering on money laundering, criminal breach of trust and corruption.

Badeh is being charged alongside Iyalikam Nigeria Limited before Justice Okon Abang of the Federal High Court sitting in Maitama, Abuja, for allegedly abusing his office as Chief of Defence Staff, CDS, by using the dollar equivalent of the sum of N1.4billion (One Billion, Four Hundred Million Naira) removed from the accounts of the Nigerian Air Force to purchase properties in choice areas of Abuja between January and December, 2013. The matter was adjourned to October 12, 2016 for continuation of trial.#alexbadeh. #Fraud #EFCC

AN1.1bn mansion seized from the immediate past Chief of Defence Staff, Air Chief Marshal Alex Badeh (retd.), has been converted to an office to be used by the Federal Government, The PUNCH has learnt.

Our correspondent, who visited the property located on Plot 6 Ogun River Crescent, Maitama, a highbrow area in Abuja, learnt that the property is being used by the Presidential Committee on the North-East Intervention headed by Lt.-Gen. Theophilus Danjuma, a former Minister of Defence.

Our correspondent observed that the warning, ‘EFCC, Keep Off!’ which was written in red ink on the fence, had been wiped off.

However, a second building (although uncompleted) seized from Badeh, which is located directly opposite the one converted by the Federal Government, still has the EFCC inscription on its fence.

Some gardeners and other domestic workers were seen clearing the grass and sweeping the compound when our correspondent visited the place.

Our reporter, who entered into the main building, noticed that the rooms had been converted into offices while desks had been set up at strategic positions.

The EFCC is prosecuting Badeh alongside a firm, Iyalikam Nigeria Limited, on 10 counts of money laundering bordering on alleged fraudulent removal of about N3.97bn from the Nigerian Air Force account.

badehs-mansion2A former Director of Finance and Account of the Nigerian Air Force, Air Commodore Aliyu Yishau (retd.),who is a prosecution witness against Badeh, had informed the court that while Badeh was the Chief of Air Staff, he routinely helped Badeh to divert the sum of N558.2m by converting it to its dollar equivalent.

He said he personally helped Badeh to buy the N1.1bn property which has now been converted to Federal Government’s use.

He had said, “Sometime in January 2013, when I was taking the normal amount to him (Badeh) in dollars, he directed that we should pay for the house. So, he brought out the balance in dollars and made up the equivalent of N1.1bn.”

The EFCC lawyer, Mr. Rotimi Jacobs (SAN), had told the court that the EFCC searched the property and recovered $1m in cash.

Jacobs said although Badeh had denied ownership of the property, his belongings, including photographs, were found in it during a search by the operatives of the commission.

Our correspondent learnt that the decision to convert Badeh’s property may be connected to the Federal Government’s plan to convert seized properties to government use and save cost.

It will be recalled that the Minister of Finance, Kemi Adeosun, had disclosed at the opening of a meeting with the members of the National Steering Committee of the Efficiency Unit on June 10, 2016, that the Muhammadu Buhari-led government was planning to convert some of the seized properties to offices in a bid to save money spent on rent.