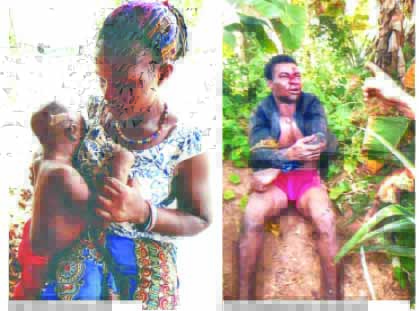 In a classic fulfillment of the popular Nigerian saying, “many days for the thief, one day for the owner of the house,” a man who made kidnapping of little children his source of income has met his Waterloo in Imo State.

The notorious kidnapper, Osundu, better known by his nickname, Galaxy, who hailed from Umuduru Egbuaguru community in Onuimo Local Council Development Area and his gang got more than they bargained for at Umu-Ode in Ezelu Okwe another autonomous community in Onuimo LCDA on October 4, 2016 as he was not only caught but burnt alive by members of the community.

Galaxy had been a terror to the people as he specialized in the kidnapping of children for sale, a horrific and heinous act he carried out for over five months.

Galaxy and members of his gang had a practice of visiting Umu-Ode Ezelu on the communities market day, when most people would have gone to the Afo Ezu in Umuna, and particularly at such hours when there would probably be no adult person around to confront them. They would then abduct any child they could see. But on that fateful day, October 4, their cup of iniquity filled up and spilled over, when the gang abducted the male child of a street trader, Mrs. Elesius Duru alias Nwunye Onyibo and zoomed off.

The woman let out a blood-cuddling scream of anguish, with all the power that heaven transmitted into voice. The high decibel of her cry of pain arrested the attention of youths in the area and members of the Imo Security Network, who pursued the gang with motorcycles and a bus. The youths overtook the gang’s getaway bus and forced it to run into a ditch by roadside. They immediately rescued the child from the gang although the little boy had sustained a small wound on his head. The little boy was handed over to his parents who immediately took him to the St. Joseph Hospital in Okwelle for treatment.  But the irate youths took custody of Galaxy, the leader the gang and one of his members, and after questioning them, they instantly administered jungle justice by setting the duo ablaze even before the police arrived at the scene.

An indigene of the community who pleaded anonymity explained that the youths took the decision because of their conviction that the duo would have been set free if they had been handed over to the police.

He said that Galaxy had been a thorn in the flesh of the community and everyone had been on the look out for the gang, hoping to catch them red-handed.

He explained further: “They normally come when most people have either gone to the market or to the farms and kidnap any child around and disappear. For the past five months we have had lost children suspected to have been kidnapped by Osundu and his group. So, they came as usual on the Afor Ezu market knowing that most people would have gone to the market and snatched the two-year old son from Nwunye Oyigbo while she was selling on the street. But this time they did not escape as youths and the members of the Imo Security Network pursued and caught them even though some of them ran away. We were able to get the leader Osundu and one other person and set them ablaze.”

However, narrating her ugly experience, Mrs. Elesius told Sunday Sun: “When they came to where I was selling I thought they wanted to buy something from me but it was when one of them carried my son Ikechukwu who was sitting beside me to the car they came with that I started shouting as they drove away. My scream alerted the people around and immediately some of the youths and okada riders (commercial motorcyclists), including the members of the Imo Security Network started to pursue them and eventually caught up with them.  “I thank God that my son was rescued alive even though he sustained a minor injury on his head. I quickly took him to St. Joseph Hospital where he was treated.”

But a twist was added to the situation when the father of the child, Mr. Elesius Duru fainted after being informed that this first child and son had been kidnapped. It took the prompt action of people nearby to revive him.

Posted by Unknown at 9:36 am
Email ThisBlogThis!Share to TwitterShare to FacebookShare to Pinterest
Labels: Crime