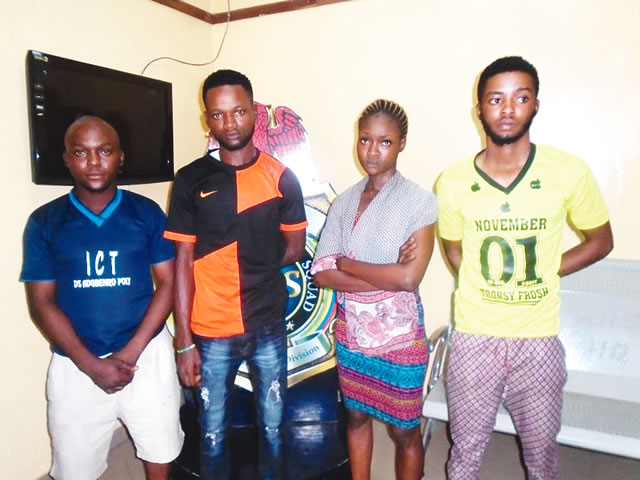 A 24-year-old woman, Bamigboye Imoleayo, has been arrested by the police in Lagos State for allegedly stealing the Automated Teller Machine card of a clubber, identified only as Alli, and withdrawing N300,000 from the victim’s bank account.

PUNCH Metro learnt that Alli had penultimate Friday attended a club in the Surulere area of the state, where he met the suspect.

He was said to have made an online transaction on his phone without knowing that the suspect was spying on him and had in the process memorised his PIN.

Alli was said to have dozed off during a conversation with Imoleayo, while the latter made away with the ATM card.

Our correspondent learnt that Imoleayo made an initial withdrawal of N90,000 from the victim’s bank account through the ATM card, before buying phones and clothes through POS transactions.

Operatives of the Rapid Response Squad of the Lagos State Police Command were said to have launched a manhunt for Imoleayo after the victim reported the incident.

Our correspondent learnt that she was arrested along with three accomplices, including her boyfriend, Adeyinka Ayodele, with whom she allegedly spent the loot in the Itori area of Ogun State.

Alli said he never knew that the suspect stole his ATM card.

He said, “I thought I had misplaced the card, not knowing that the lady stole it.

“I was shocked on Saturday afternoon when I received alerts amounting to N90,000 withdrawals.

“While I was still contemplating how to deal with the issue, I got another debit alert for buying two Infinix phones totalling N84,000. I was confused and shocked.

“On Sunday, there was another debit. I lodged a complaint on Monday at my bank and I was told that the withdrawals and shoppings were legitimately done by me.

“I reported at the RRS office on Monday after informing my bank. By then, the withdrawals and shoppings had totalled N300,000.”

The suspect, in her statement to the police, said she stole the card when the victim slept off.

She explained that she had wanted to steal N20,000, but was tempted to take more when she saw there was a lot of money in the victim’s account.

She said, “I was desperate to restock my shop at Wasimi in Ogun State, and also take care of my only daughter.

“After I spied on his PIN during the banking transaction on his phone, I intended to withdraw only N20,000 out of his bank account and then destroy the card.

“However, when I withdrew the money and checked the account balance, I was shocked to see he had a lot of money. Afterwards, I withdrew another N70,000 that day.

“The following day, I called my boyfriend, who instructed me not to destroy the card, but that I should come to Itori, Ogun State, where he resides.

“On getting there, he called two of his friends, Abimbola Akintanna and Owolabi Bamidele, to use the card at the nearest bank.”

She added that they took the card to a shopping mall in Abeokuta, where they bought phones and clothes.

A police source said Alli and Imoleayo had sex on the night of the incident.

He said, “It was after they slept together that the woman ran away with his ATM card. The police recovered some of the items bought with the money.”

The spokesperson for the state police command, SP Dolapo Badmos, confirmed the incident, adding that the suspects and exhibits had been transferred to the State Criminal Investigation and Intelligence Department, Yaba, for prosecution.

She urged members of public to always protect their PINs during banking transactions.

Posted by Lawrencia at 7:11 am
Email ThisBlogThis!Share to TwitterShare to FacebookShare to Pinterest
Labels: Crime