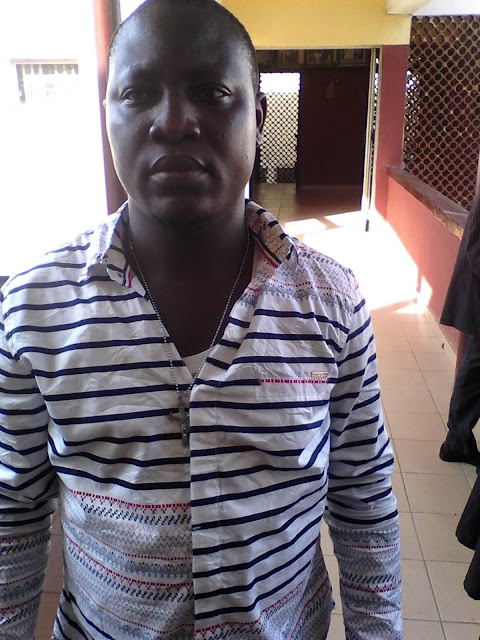 One Okunmwendia Victor was arraigned yesterday by EFCC before Justice P. I. Ajoku of the Federal High Court, Benin City on a three count charge bordering on fraud and obtaining by false pretense.

Okunmwendia 29, a graduate of Delta State university is alleged to have presented himself as Sister Julia Imoke, founder and coordinator of Happy Home Orphanage in his attempt to extort money from unsuspecting persons.

One of the counts reads, “that you Okunmwendia O. Victor " m" (alias Sister Julia Imoke of Happy Home Orphanage) and others now at large on or about the 24th of January 2016 in Benin city, Edo State within the jurisdiction of this honourable court with intent to defraud, did obtain the sum of 900 US Dollars from one Ada k. "F" through Western union money transfer under the false pretence that you are sister Julia Imoke, the founder and coordinator of a non existing Happy Home Orphanage, a pretext you knew to be false and thereby committed an offence contrary to Section 1(1)(a) of the Advance Fee Fraud and Other Related Offences Act,2006 and punishable under Section 1(3)of the same Act”.

The accused person pleaded not guilty when the charge was read to him.

Counsel to the Commission, M T Iko asked the court to fix a date for trial and to remand the defendants in prison custody. Attempt by the defense counsel, Osman Idehen to move for bail was refused by the court.

Justice Ajoku adjourned the matter to November 16 for trial and ordered that the defendant be remanded in prison custody.