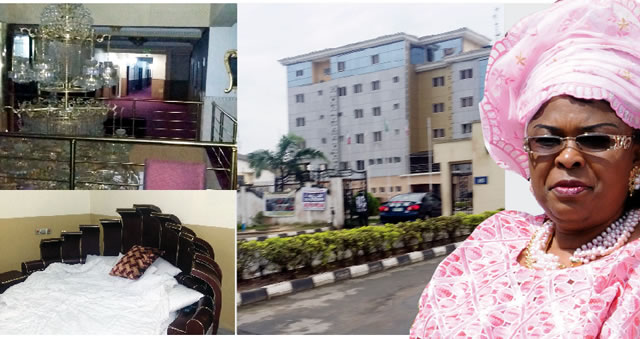 Indications emerged on Friday that the Economic and Financial Crimes Commission was intensifying moves to gather evidence against the former First Lady, Patience Jonathan, for a possible prosecution.

The source said that the commission had assembled a team of detectives saddled with the responsibility of identifying all houses and property belonging to the former First Lady.

It was stated that the operatives had been instructed from the office of the commission’s chairman to mark such houses and property as part of the preparation for the prosecution of the First Lady.

It was further stated that the operatives were focusing attention on property in Abuja, Yenagoa, Port Harcourt and other cities in the country.

The source said, “It would not be correct to conclude that the commission has halted the investigation into the activities of the former First Lady.

“The investigation is progressing and it is being handled by the office of the chairman of the commission.

“A team of operatives has been assembled to identify all her properties in the country with a focus on Abuja, Port Harcourt and Yenagoa.

“The responsibility of the team is to mark all such properties in preparation for a possible court action.”

The EFCC had traced $5m to the personal account of the former First Lady and frozen the account domiciled in Skye Bank Plc last month.

The commission’s face off with Mrs. Jonathan started when the commission froze the accounts of four companies traced to the Special Adviser to ex-President Jonathan on Domestic Affairs, Waripamowei Dudafa.

However, the commission was brought into a face-off with Mrs. Jonathan when she deposed to an affidavit that the money belonged to her.

The former First Lady has since filed a suit at a Federal High Court in Lagos against the commission seeking an order to unfreeze the accounts.

She is also demanding $200m compensation from the commission for alleged violation of her rights.

The Head of Media and Publicity of the EFCC, Mr. Wilson Uwujaren, said that he did not have the information on the latest move by the commission as of the time of filing this report on Friday.

A source at the commission said that Abati was still struggling to meet the conditions of the administrative bail granted him by the commission on Friday night.

Posted by Unknown at 10:18 am
Email ThisBlogThis!Share to TwitterShare to FacebookShare to Pinterest
Labels: NationalNews