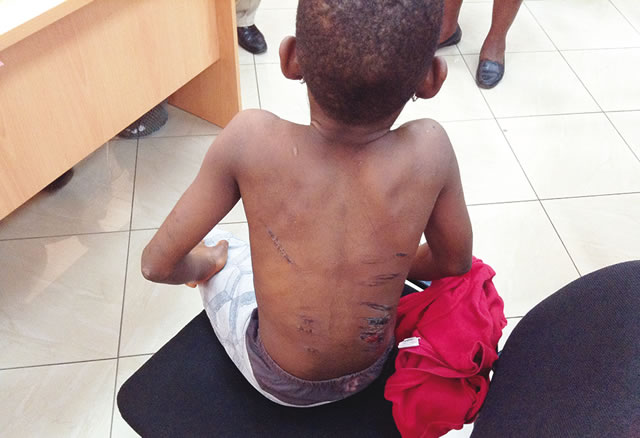 A 12-year-old girl, Mmesoma Ani, has been admitted to the Lagos University Teaching Hospital, Idi-Araba, Surulere, after she was allegedly tortured by her aunt, Mrs. Ogechi Iruwane.
PUNCH Metro learnt that the mother of three allegedly used her bare hands to pinch off the victim’s chest, and inflicted injuries on her back.
Ani was also said to have been starved for two days for allegedly stealing a piece of meat. A trader on Nurudeen Street, Orile Iganmu, Lagos State, where the incident happened, raised the alarm on Tuesday.

The case was said to have been reported to the Lagos State Office of the Public Defender.

Officials of the agency reportedly apprehended the suspect and subsequently handed her over to the police at the Orile Iganmu division.

The victim was afterwards taken to LUTH.

The trader, who discovered the incident, said Ani returned an empty bottle of soft drink to her when she saw her injuries.

She said, “I observed that she was not walking well. I drew closer to her and that was when I saw that her hands were also swollen. She said her aunt flogged her. She showed me her chest and I saw that the skin covering one of her maturing breasts had been pinched off. She removed her clothes and I was alarmed when I saw serious injuries on her back.”

The trader, whose name is protected for security reason, explained that she called the attention of passersby to the injuries.

“I wanted to take her back to the aunt to ask why she battered the girl so badly without taking her to a hospital, but her neighbours told me it was not the first time she would beat her. I decided to report the matter to the OPD,” she added.

A source at the OPD said the residents prevented the suspect from escaping when she went to find out why Ani had not returned home from the errand she sent her.

He said, “The girl claimed she was 12 years old, even though she looked younger. She also looked malnourished. There were different scars on her back. The irony is that the suspect has three children and they look well-fed.

“The girl claimed that she is the 11th of 12 children. She said the woman came to take her from her parents in Enugu State in December 2015. She said she was in primary three before she was brought to Lagos, but since her arrival, she had not been going to school. She said the woman accused her of stealing a piece of meat and for about two days, she was not given food to eat.”

The Director of the OPD, Mrs. Salami Olubukola, commended the trader that reported the case, urging residents of the state to always be on the watch for child abuse cases.

“The girl is now in our care. We will not relent in our efforts to stem the tide of child abuse in Lagos State,” she added.

The Police Public Relations Officer, SP Dolapo Badmos, confirmed the incident, adding that the matter would soon be charged to court.

Posted by Unknown at 8:36 am
Email ThisBlogThis!Share to TwitterShare to FacebookShare to Pinterest
Labels: Crime