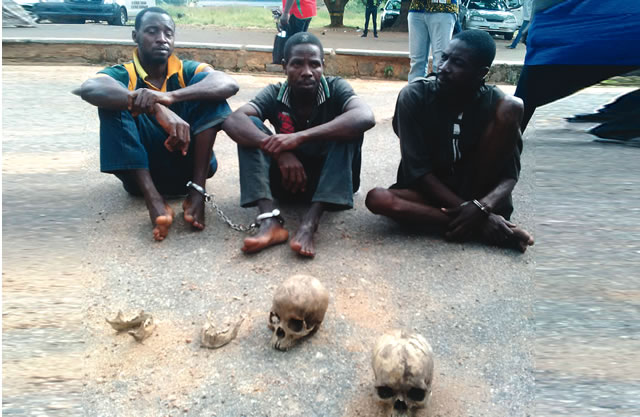 Three persons in possession of two human skulls have been arrested at a hideout in Ogbomoso by policemen from the Oyo State Police Command.

The state Commissioner of Police, Samuel Adegbuyi, said the arrest was made after the police received information from members of the public, who had raised the alarm that the suspects were dealing in human parts.

One of the skulls was discovered to have had what looked like a deep machete cut at its temple, leaving the police to suspect that the person the head belonged to might have been gruesomely killed.

Ramoni Akeem, 41, Azeez Ojelade, 36, and Salimon Salami, 40, were the suspects arrested by the police.

Akeem said he paid N10, 000 for the skulls and that Salami was the vendor.

Akeem said, “I am a herbalist and I heal people with herbs. I have never used body parts for rituals. One day, a friend came to me and said his friend discovered two corpses on a land where he had wanted to cut trees. He asked if I knew what body parts could be used for. I told him that I did not know anything about charms prepared with body parts.

“One of our friends, Saheed Ifa, who is a senior herbalist, heard about it and said he could make use of the skulls to prepare charms. When the skulls were produced, the man who brought them demanded for N10, 000. I paid him in four instalments. But that is all I know about the skulls. Ifa has travelled to Lagos. I don’t know where he lives in Lagos.”

Salami, who claimed to have discovered the corpses, denied any wrongdoing.

He said, “I was asked to cut some trees on a large piece of land but when I got there, I discovered two corpses and I told a friend that I was afraid to work on the land because someone killed two people there. He said I should continue with my work while he looked for what to do with the corpses. When he got a buyer, he contacted me and I went back to the bush and dismembered the heads from the bodies,” he said.

Posted by Unknown at 8:03 am
Email ThisBlogThis!Share to TwitterShare to FacebookShare to Pinterest
Labels: Crime