I Thought God Had Forgiven Me – Suspect Arrested For Kidnap, Murder Of Poly Student 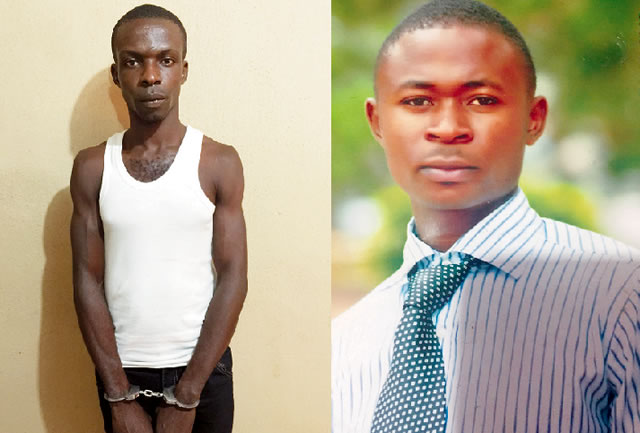 It was supposed to be a clean grab, a few days underground and perhaps a short while negotiating ransom with the family of their victim, a young man identified by the police as Ikenna Osuji. But Ikenna, a student of the Federal Polytechnic, Nekede, Imo State, would never get out of it alive.

On May 25, 2016, Ikenna, who was working as a taxi driver along to finance his studies, met his death in the hands of kidnappers when he drove into a land where 30-year-old Chinedu Azuazu was a security guard.

Saturday PUNCH learnt that Ikenna was fairly known to Azuazu because he used to drive prospective land buyers to the large expanse of land guarded by Azuazu in his cab. But May 25 was the last day the young man would ever be seen alive. He drove into the land again that day and was never seen again.

When Azuazu was nabbed on September 12, 2016 by operatives of the Inspector-General of Police Response Team, details of the gruesome end Ikenna met in the hands of his captors emerged.

Azuazu, a father of one living at Omouku area Port Harcourt, Rivers State, said he was employed to guard the land in question, which belonged to the Alakahia community close to the University of Port Harcourt Teaching Hospital.

He said, “The man who employed us never paid us. He would rather take us to a bar and buy us drinks and then give us small money, like N3,000.  It was too small for me. When my wife became pregnant and I needed money to prepare for our coming child, he refused to assist me.

“I saw my chance to make money when Ikenna came to our site on May 25. My colleague, Joshua, and I decided to kidnap him. We believed he was from a rich family and thought that was why he normally brought people to buy land at the site.

“When we sighted him, we threatened to shoot him with our double-barrelled gun. We then kidnapped and took him deep into the forest. While we kept him there, we called his relatives with his phone and demanded a N5m ransom.

“Ikenna’s brother told us that he did not have up to that amount. We reduced the ransom to N2m and threatened to kill him if they did not pay. While we were waiting on the family to pay us the ransom, Ikenna spent 14 days in our custody.

“On the 15th day, I left him in Joshua’s custody to go and buy some food. When I returned I found him lying motionless on the ground.   I asked Joshua what happened and he told me that when I was away, Ikenna attempted to escape and he almost overpowered him before he found a stick and hit him in the head.”

Azuazu said he checked Ikenna’s pulse and realised that he was still breathing but faintly.

According to him, there was nothing he could do to help the young man and had to leave him on the ground till he breathed his last.

He said after few hours, he went to check Ikenna’s pulse again and noticed that he had died.

The suspect said, “I called his brother, who had been communicating with us about the ransom and he said he could only afford N120,000. I asked him to take it to the Teaching Hospital Road and drop it at a certain spot.

“He did as I instructed and I went there to take the money. We took part of the money to  the Rumuola Market and bought a bedsheet, which we took to the forest to wrap Ikenna’s body. We stuffed it in the boot of his car and took it to a farm in Umunkwa Igbodo in Etche Local Government of Rivers State, where we dumped it.

A source said when police investigators visited Alakahia community, a chief, Hyacinth Akwukwauegbu, told them that a corpse was found on his farm and that it had been buried without reporting the discovery to the police.

Azuazu said after Joshua left, he also travelled to Lagos to search for a job but had to go back to Port Harcourt when no job was forthcoming.

The suspect said, “Few days before my arrest, I had a dream that my former boss, Ibe, was killed. I called to warn him but he asked if I had anything to do at the time. When I told him I had no job, he told me to come and see him.  When I got to his house, the police arrested me and said I killed Ikenna.  I did not know how they knew.

“I thought God had forgiven me. In July 2016, I went to a pastor and confessed what I did. He prayed for me and warned me against going back to crime. I have heeded his warning. After my arrest, I have also met Ikenna’s brother to ask for forgiveness.”

Ikenna’s elder brother, Peter, who was the one the kidnappers contacted, said he paid N1.2m as ransom as against the N120,000 Azuazu admitted to.

According to him, Ikenna bought a car and used it as cab to support himself in school.

He said, “Anytime he was on break, he came to Port Harcourt to use his car as a taxi. I first noticed that sometime was wrong when I had not seen for some days and I got a call from one of my in-laws, who confirmed the same thing that he was missing.

“The day I got a call from his kidnappers, I was about to ask him where he had been because the call came from his line when they told me they had abducted him and I should pay or they would kill him. For the weeks they were in touch, they refused to allow me to speak with him.

“I had to sell one of my properties to raise N1m to add to the little cash I had. But they insisted that it had to be N5m and that if they killed Ikenna, his blood would be on my head. I was terrified and went everywhere in search of money.

“When I eventually got N1.2m, I called them and lied that I had N2m. They told me to take it  to East-West Road and drop it there. They said if they saw any glimpse of a policeman, they would kill my brother. When I got to Alakahia Junction, and dropped the money as instructed, I called Ikenna’s line but it was switched off. I had to quickly report the mater to Chuba Police Division and the matter was later transferred to the Rivers State Police Command’s Anti-Kidnapping Department.”

Peter said after one month of seeing no trace of his brother, he started visiting prophets for help in desperation. The prophets told him his brother would be found alive.

He later reported the case to the Inspector-General of Police Response Team, who commenced investigation and eventually tracked down the suspects.

The corpse of the deceased was later exhumed and deposited in the mortuary.

The police have said investigation was still ongoing in the case.

Posted by Unknown at 9:08 am
Email ThisBlogThis!Share to TwitterShare to FacebookShare to Pinterest
Labels: Crime