Landlord’s Son Stabs Tenant’s Wife; Beats Her To Coma, For Allowing An Enemy Of The Landlord, Into Her Apartment 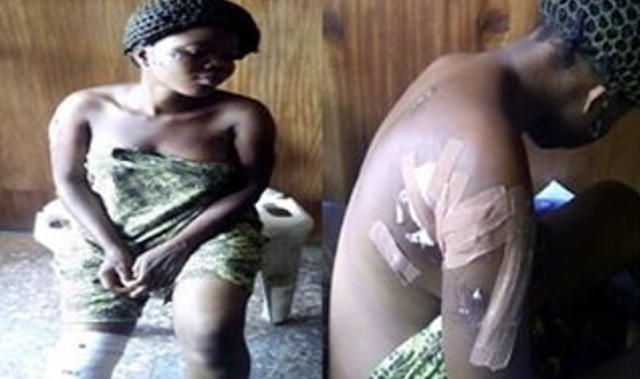 Mrs. Taiwo Kehinde, a newlywed, was allegedly stabbed many times by her landlord’s son, Jimoh Yusuf, for allowing a man, considered as an enemy of the landlord, into her apartment at Ishaga Street, Lagos, Vanguardngr reports.

The visitor was said to have been banned from entering the house by the landlord. According to Mrs Kehinde, “my landlord’s son, Jimoh Yusuf, attacked me right inside my apartment with broken bottles.

My sin was that my husband allowed one of his friends into our apartment. I was returning from my shop last Friday, when I met this family friend, Monday Michael, who lives opposite us.

He told me to leave the house that my husband and our landlord’s son were quarrelling. I decided to go inside and change into something else. The family friend left for his house, while I entered our apartment.

I was trying to change my wears when Jimoh barged inside and started shouting. He said ‘I have told you and your husband that I don’t want to see that man (family friend) anywhere close to this house.

But you wouldn’t obey. I am going to kill you before your husband comes back’. Before I knew it, he broke the bottles in his hands and started stabbing me all over my body, until I passed out.

This is not the first time he has beaten me. I am not his wife, neither am I related to him." Mrs. Kehinde, however, expressed gratitude to God for bringing her out of coma.

Police sources hinted that the suspect had been arrested and charged to court on Wednesday from where he was remanded at the Kirikiri Medium Security Prison over failure to meet the bail conditions.

Posted by Unknown at 9:24 am
Email ThisBlogThis!Share to TwitterShare to FacebookShare to Pinterest
Labels: NationalNews