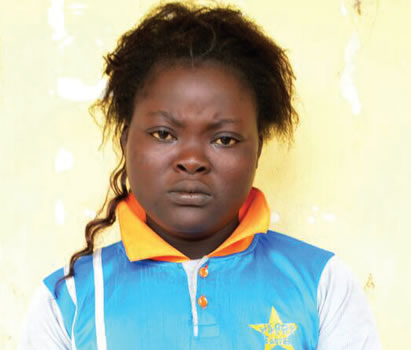 A 23- year-old lady, Omolara Oluwagbemi, has been arrested by the Ogun State Police Command for stabbing her fiance, Sodiq Dauda, to death. The incident happened on Tuesday, October 18, 2016 at 10, Onirugba Street, Ijebu Ode.

The two lovers, whose wedding had been fixed  to hold in December, were said to have had a disagreement when the deceased accused the suspect of not rendering a proper account of the gas business he entrusted to her.

The suspect had told the police that her lover had sent her away from their apartment over the issue.

But she said on hearing about the case, Sodiq’s mother asked her to return to him, promising to come over to settle the disagreement between them.

But things took a tragic turn, when Omolara went back to the apartment and Sodiq reportedly beat her brutally and allegedly attempted to stab her with a broken bottle before she ran to the kitchen and took a knife with which she stabbed Sodiq in the chest.

Sodiq died of his injuries the next day, in the General Hospital, Ijebu Ode, where he was rushed to.

The state Police Public Relations Officer, Abimbola Oyeyemi, who confirmed the incident, said the victim was rushed to the Ijebu-Ode General Hospital by the policemen from the Igbeba division but that he died while undergoing treatment.”

Oyeyemi, an Assistant Superintendent of Police, said the state Commissioner of Police,  Ahmed Iliyasu had ordered that the suspect be transferred to the homicide section of State Criminal Investigation and Intelligence Department, Eleweran, Abeokuta for further investigation.

Posted by Unknown at 9:47 am
Email ThisBlogThis!Share to TwitterShare to FacebookShare to Pinterest
Labels: Crime