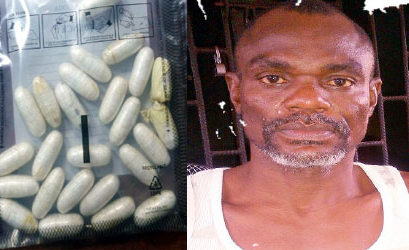 Operatives of the National Drug Law Enforcement Agency, NDLEA, have arrested a 47-year-old man, who attempted to export 270 grammes of cocaine to Madagascar.

The NDLEA Commander at the Lagos Airport, Ahmadu Garba, said: “This is the first arrest and seizure in the year of a passenger heading to Madagascar from this airport. The suspect, Odili Onyekwere, successfully excreted 25 wraps of cocaine, which he ingested, while under close observation.

“He is cooperating with our team of investigators and the case will soon be charged to court.”

During interrogation, the Rivers State-born suspect said he went into drug trafficking out of frustration. The father of two, who trades in foot wear in Lome, Togo, said:

“I am married with two children and I sell shoes in Lome, Togo. As a result of the economic downturn, my capital kept depreciating until I lost everything.

“It was the frustration of not being able to provide for my wife and two children that made me go into smuggling of cocaine.

Commenting on the arrest, the Chairman/Chief Executive of the agency, Muhammad Mustapha Abdallah, said with the use of latest technology in drug control, the agency would continue to disappoint those hoping to get rich quick from drug trafficking.

Posted by Unknown at 9:55 am
Email ThisBlogThis!Share to TwitterShare to FacebookShare to Pinterest
Labels: Crime