Man Beats Wife To Stupor For Accusing Him Of Snoring 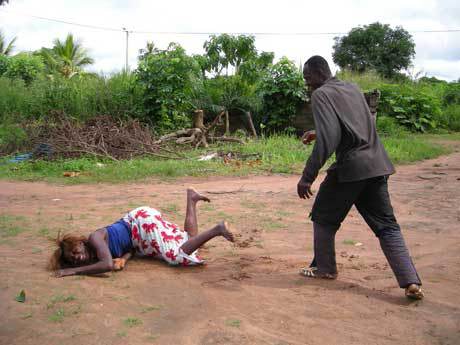 A 30-year- old, commercial motorcyclist, Tukur Paul on Friday beat his wife, Mrs Jennifer Paul to stupor for accusing him of snoring. It was the intervention by neighbours and passers-by that saved her from further attack.

However, the husband said his wife prompted him to beat her after several warnings.

“She prevented me from sleeping after having a hard day, I pleaded with her but refused,” he said.

Paul said having gone through a hectic day, that he decided to have some rest but was prevented by his wife because he was snoring.

“What happened, I will say is the devils handiwork? I lost my motor bike which has been helping me to fend for the family.

“I immediately contacted the police who was able to help me get it back. I brought it back home and all these while my wife could not call to know where I was. I got home only for me to have some rest and after dozing off; my wife woke me up to tell me I was disturbing her with my snoring,” he said.

Paul who later apologised to his wife thanked the neighbours for the brotherly love they have extended to his family.

The wife told our correspondent that the incident was due to communication gap, which was misinterpreted.

“I was angry because the husband left me and the children without telling us where he went.

The couple had been living together for past nine years and the union is blessed with three children.

Posted by Unknown at 10:43 am
Email ThisBlogThis!Share to TwitterShare to FacebookShare to Pinterest
Labels: NijaDrama