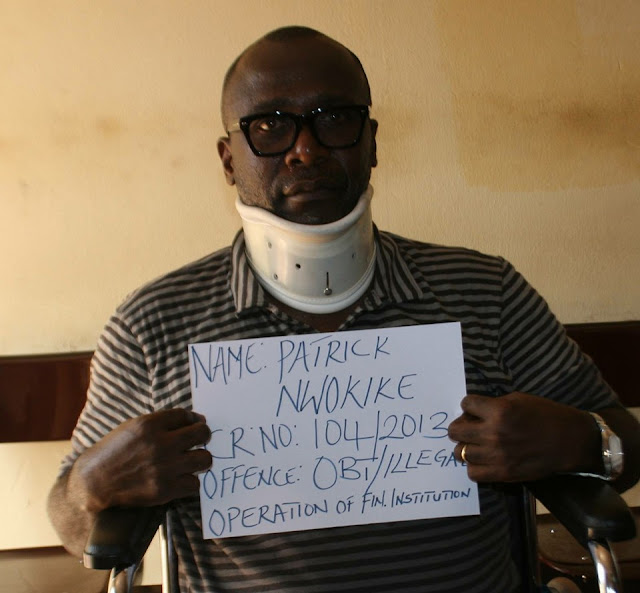 Following over a hundred petitions from across the country on the operations of an alleged Wonder bank and its nefarious activities, the EFCC on Thursday October 6, 2016 arrested the Managing Director of “Lets Partner With You Ltd”, Chief. Patrick Shanchi Nwokike at his residence in Enugu, Enugu state.

Petitions from a cross section of Nigerians and cutting across religious, gender, ethnic, economic and social class indicate that the company had over the past five years solicited and obtained deposits of more than N4,000,000,000 ( Four Billion Naira Only) from the general public with promise of mouth watering interest in return.

According to investigations conducted by the Commission, the company has no license to solicit and manage funds for the public nor was it registered with Securities and Exchange Commission, SEC, or the Nigeria Deposit Insurance Company, NDIC.

Further investigations revealed that a 10% (Ten percent) interest was for some time paid on invested capital which for no justifiable reason, was suddenly stopped and all efforts by depositors to have at least the capital of their investments returned nor terminate their investments proved abortive.

Many of the complainants alleged that the operators of the scheme especially, Chief Nwokike not only live very flamboyant lifestyles but acquired several personal assets as well as using their deposits for philanthropic enterprise.

The company was also found to have over six accounts in about four banks with the CEO of “Lets Partner With You Ltd” and his wife being the only signatories to the accounts.

In his statement, Nwokike who acknowledged that depositor’s funds with his company was about N4,000,000,000( Four Billion Naira Only) , denied operating both money lending and investment business as alleged by the petitioners.

He stated that his company is into partnership business which receives money from interested partners who desires interest from their money after it might have been infused into businesses especially that of small scale traders.

Nwokike argued that the present problem facing his company is as a result of the general economic downturn in the country; an argument punctured by his depositors who said his company started defaulting even before the present economic woes.

Investigation is still on-going to ascertain the extent of the company’s operations, its culpability, likely recovery of funds and possible prosecution.

Posted by Unknown at 11:49 pm
Email ThisBlogThis!Share to TwitterShare to FacebookShare to Pinterest
Labels: Crime