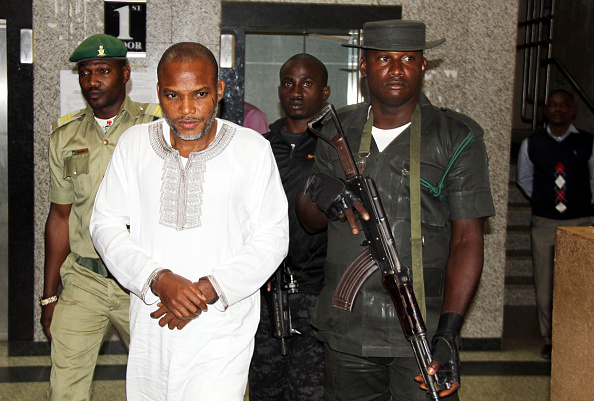 Fourty-six-year- old  Kanu had been arrested by the DSS  at Muritala Muhammed International Airport  Lagos in October, 2015,  on his way back from the United kingdom (UK) and since then, has been in detention and trial over alleged treasonable felony.

IPOB instituted the case which would come up today (October 5, 2016) because the Nigeria judiciary could not deliver judgment in the matter concerning illegal detention of its leader, Kanu.

A statement from the Media and Publicity Secretary, Mr. Emma Powerful, alleged that the Federal Government had also started making moves to rubbish the courts managed by ECOWAS, thinking that it was a Nigeria court it could manipulate.

He said they went to ECOWAS court because of the illegal detention of Kanu which, he said, has sparked condemnation from notable people across the world.

Powerful also called for the release of its leader, Kanu, who has been detained illegally by the DSS and the Nigeria government in Kuje prison, Abuja even after two courts had granted him bail.

“We are also worried why the democratically elected government of President Buhari cannot obey court order in Nigeria and why his advisers cannot afford to let him know that the continued detention of Kanu and other IPOB members, without trial, will bring down the image of his government.”

by the competent court of jurisdiction in Abuja and Justice John Tsoho, who was handling the matter recently hands off the case and was allegedly disgraced out of the case because he wanted to rubbish the judiciary,” Powerful stated.

Posted by Unknown at 9:55 am
Email ThisBlogThis!Share to TwitterShare to FacebookShare to Pinterest
Labels: NationalNews