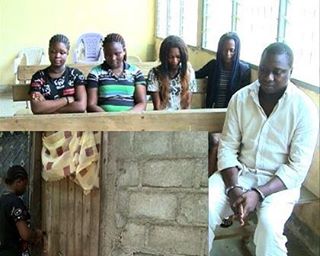 Eyambe Miliki Sona has been arrested in Cameroon while attempting to traffic 4 Nigerian girls to Russia. According to CrTV, the young girls whose ages range between 19 to 24 years, went to Cameroon, all the way from Nigeria after being promised travel VISAS to Moscow –Russia.

One of the girls Ewangi Patriarch 19 year old recounts that Sona directed them to Cameroon by phone. Upon arrival, they were lodged in a single room while waiting for their travel documents. They, however, got impatient after waiting for two weeks and not receiving any positive sign of the alleged trip to Russia.

The Divisional Officer for Muyuka Sub Division, Tambe Thomas Tabot, and his collaborators received a tip- off from an informant. Investigations zoomed on Sona who was found in possession of fake documents. He is presently in police custody while the four girls will be handed to the Nigerian Consulate for repatriation to Nigeria.

Posted by Unknown at 9:17 pm
Email ThisBlogThis!Share to TwitterShare to FacebookShare to Pinterest
Labels: InternationalNews