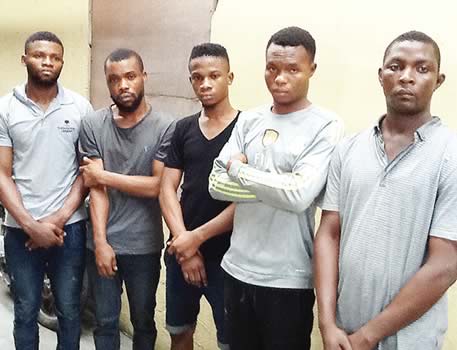 The suspects are Emmanuel Okechukwu, Ikechukwu Orji and Chisom Azubuke.

Two others, who were estate security guards, Uchechukwu Ofoepeka and Goddy Ogobi, were named as accomplices.

PUNCH Metro learnt that the owner of the company, Isaac Ugwu, had caught one of the workers, Okechukwu, with a carton of a drug valued at N400,000.

The suspect was allegedly taking it away from the company’s warehouse on Plot C, Mobolaji Johnson Estate, Lekki, Lagos, when he was caught.

Ugwu was said to have reported the matter at the zone 2 command through a petition to the Assistant Inspector-General of Police, Abdulmajid Ali.

The case was subsequently transferred to the anti-kidnapping unit of the command.

Our correspondent learnt that in the course of investigation, Okechukwu mentioned the names of the other workers and estate guards as accomplices.

The zone 2 command spokesperson, Muyiwa Adejobi, said the confession led to the arrest of the other suspects.

He said, “Upon interrogation, all the suspects confessed to the crime and revealed that the nefarious act had been going on since May 2016.

Adejobi, a Superintendent of Police, said the suspects had been arraigned before an Igbosere Magistrate’s Court on two counts of conspiracy and stealing, contrary to sections 409 and 285 of the Criminal Law of Lagos State, Nigeria, 2011.

The Chief Magistrate, Mrs. Sola Adeoye, admitted them to bail in the sum of N1m with two sureties each in like sum.

The AIG, Ali, while condemning the crime, urged industrialists, businessmen and women to carry out security checks on intending employees.

Posted by Unknown at 8:34 am
Email ThisBlogThis!Share to TwitterShare to FacebookShare to Pinterest
Labels: Crime