Photos Of Nigerian Students Detained In Turkey Over Failed Coup, As The Government Begins Massive Deportation 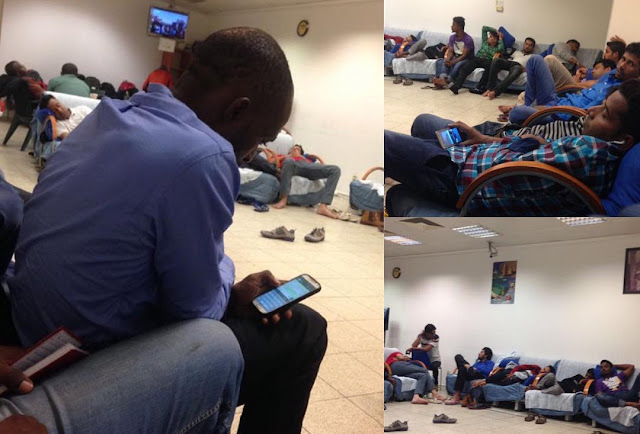 The detained Nigerians are mainly students of Fathi University, one of the 2099 schools, dormitories and universities shut down in the wake of the July 15th failed coup in Turkey.

The Turkish authorities said the schools and universities were terrorist schools because they have links with Islamic scholar Fethullah Gulen, whom the Turkish government had accused of being the mastermind of the coup in Turkey.

Rukkaya Usman, a final year Nigerian student of Political Science and International Relations at the University of Melikseh, deported from the country, after being detained for 10 hours, told TheCable that the Turkish government didn't give a reason for the action.

Rukkaya Usman, a Nigerian student deported from the country, said the Turkish government does not give a reason for the action.

Usman, a final year student of political science and international relations at the University of Melikseh, told TheCable on Saturday that she arrived in Turkey at 8am on September 26, but that she was detained at the airport for about 10 hours after which she was funnelled into an aircraft for a flight back to Nigeria. She said:

“As I got to the airport, at the immigration; they (immigration) collected my passport and resident permit. They started to ask me questions like: ‘what are you studying?’ ‘What’s your father’s name?’ They took my passport. This was on September 26. I asked what was happening. But they said they didn’t know, that it was a new law, that they were sending me back to my country,” she narrated.

“They said if I had any questions I should go to my embassy and ask. I was put in a room. There were about seven other people. We were locked up in the room; there were cameras. We were not allowed to talk to anyone. I was told that my next flight was at 6pm. I asked for my passport, but they said I would get it when I get to my country.

“They took me to the plane, and they watched me as I boarded the aircraft.”

Meanwhile, the FG of Nigeria, on Friday, summoned the Turkish ambassador to Nigeria, Hakan Cakil, over the detentions. The Permanent Secretary, Ministry of Foreign Affairs, Mr. Sola Enikanolaiye, said the Nigerian government expected a reasonable explanation from Cakil regarding the poor treatment of the students and directed the envoy to ensure their release without delay.

Posted by Unknown at 10:50 am
Email ThisBlogThis!Share to TwitterShare to FacebookShare to Pinterest
Labels: Gists