Picture Of The 14-Year-Old Girl, Who Married Emir of Katsina, As Katsina Emirate Council Say The Marriage Is Irreversible 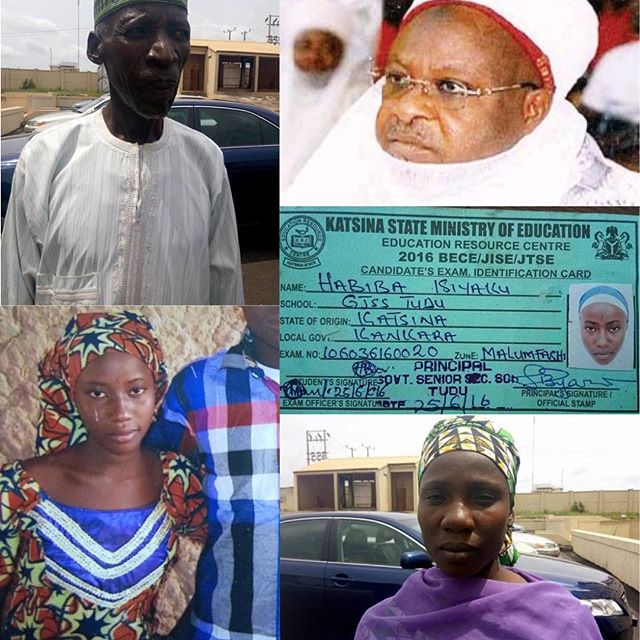 On the 16th August, 2016 one Habiba Isiyaku was allegedly abducted from her school, Government Senior Secondary School, Kudun Kankara LGA of Katsina State by one Jamilu Lawal, an aide to the emir of Katsina, HRH. Alhaji Abdulmummuni Kabir Usman.

She was later converted to Islam and the emir married her, saying the decision is irreversible. The Punch reports:

The Katsina Emirate Council on Thursday declared that the marriage between 14-year-old girl, Habiba Isa, and the Emir of Katsina, Alhaji Abdulmumin Usman, was irreversible.

The council said the marriage and Isa’s conversion to Islam were voluntarily and willingly entered into by the girl.

The council told officials of the Katsina State chapter of the Christian Association of Nigeria, who visited Usman in his palace over the issue, that there was no evidence that the 14-year-old girl was forced to act against her wish.

The family of Isiyaku Tanko of Warkaza community in the  Kudun Kankara Local Government Area of Katsina State on Wednesday alleged that Usman forcefully abducted their 14-year-old daughter and forced her into marrying him.

She was said to have been abducted on August 16, 2016, by one Jamilu Lawal, an aide of the emir, who worked in the palace. She was converted to Islam and held incommunicado.

Isa is expected to clock 15 years on Saturday, October 15, 2016, and would have resumed school for the new academic term, but for her abduction.

The incident was blown open when the father of the victim lodged a complaint with Stefanos Foundation, a humanitarian civil rights organisation, which took over the matter.

Isa was allowed to appear before CAN officials and others in the palace on Thursday, and was asked three questions by the Kaora Katsina, Alhaji Nuhu Abdulkadir, on behalf of the emirate council.

She was asked whether she was forcefully converted to Islam, to which she replied no.

She was also asked whether the emirate council or any other person forced her into the marriage with the emir, to which she also answered no.

The third question was whether by the time she met her husband, she was already experiencing menstrual period, to which she answered yes.

The Kaora Katsina said, “The three questions are in line with the dictates of the Islamic religion. Since Isa has voluntarily answered the three questions in our presence, there is no going back on her marriage.”

Abdulkadir explained that in as much as the emirate council would not want to be involved in the controversy surrounding the marriage, the palace of the emir was open to all Nigerians irrespective of religion and tribe.

A letter purportedly written by Isa’s father was read to the gathering, apologising to the emirate council for any embarrassment the issue might have caused it (the council).

The CAN Chairman for Katsina State, Very Rev. Nelson Ugochukwu, however, told the emirate council that Isa’s marriage did not have the consent of her parents, who he said, were crying for justice in Abuja.

The CAN leader said the association was not in support of the marriage and her conversion to Islam.

He said, “This girl (Isa) standing before us is 14 years. She is supposed to be in school and not given out in marriage.

“We are not pleased and we demand justice. Her parents are in Abuja, crying for justice. In my religion, you cannot give out any lady in marriage without the consent of her parents. This marriage does not have the consent of this little girl’s parent. The parents are not happy with what has happened.

“As the CAN chairman in Katsina, I am the father of all Christians in the state. Our people are not happy. The parents told me that the girl is 14 years. She is supposed to be in school. I want justice to be done in this matter. I want the emirate to look into the matter. To us, the girl is still a Christian.”

Posted by Unknown at 9:53 am
Email ThisBlogThis!Share to TwitterShare to FacebookShare to Pinterest
Labels: NationalNews