Policeman Stabs Tout To Death Over N100 In Lagos State 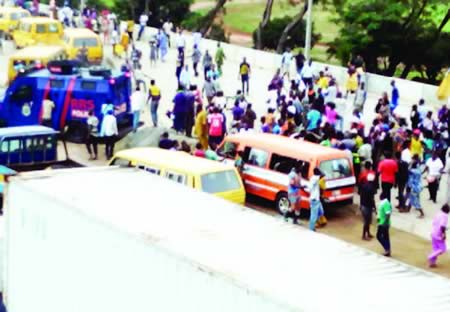 Pandemonium erupted on Saturday at Berger bus stop, Lagos State, after a policeman, who was a passenger on a 14-seater bus end route from Ibadan, Oyo State, reportedly stabbed a motor park tout, popularly called agbero, to death.

The deceased was identified simply as Ahmed and was reportedly planning to marry in December. The policeman was said to be serving in a command  outside Lagos.

PUNCH Metro learnt that one of Ahmed’s friends had stopped the bus with the inscription, Success Express, and demanded N100 from the driver, who reportedly declined to pay the money.

In the ensuing argument between the driver and the agbero, the policeman, who was at the front seat, reportedly got off from the bus.

Ahmed had gone to the scene to know what transpired.

Ahmed was said to have been taken in the bus to the Lagos State Accident and Emergency Centre at the Ojota Tollgate, where he was confirmed dead on arrival.

A friend of the deceased, who identified himself as Agberoko, said men of the Rapid Response Squad at the bus stop released tear gas canisters to rescue the killer cop.

Agberoko, who spoke in Yoruba, said, “The RRS men shot into the air and also fired tear gas canisters to disperse us when we intercepted the policeman.

“They recscue and took him into the Armoured Personnel Carrier stationed in the area.”

Our correspondent, who arrived at the scene shortly after Ahmed’s corpse was brought back to the bus stop, noted that his friends went violent, and vandalised the bus.

The angry mob also hurled stones at the RRS’ APC as the operatives drove off from the scene.

A trader, Taibat Adejare, who was in tears, said Ahmed was decent among his counterparts.

She said, “He just came out around 4pm today (Saturday). He ate a snack with a bottle of drink. It was about an hour after he came out that the incident happened.

“He was very peaceful and jovial. He didn’t force drivers to pay. The policeman stabbed him with a poisonous knife.

“I was joking with him some days ago that he should go and marry. He said he was planning marriage already and that it would come up in December.”

The Lagos State Police Public Relations Officer, SP Dolapo Badmos, however, said the suspect was not a policeman, adding that the corpse had been deposited in a morgue.

He said, “A group of social miscreants allegedly engaged one Sulaiman Anafi, a driver in charge of a Mazda commercial bus with number plate, XB 251 LEM, in a brawl at the Berger bus stop, inward Lagos, over parking ticket.

“In the process, one of the passengers in the bus reportedly stabbed one of the area boys in the area with a knife and he died on the way to a nearby hospital.

“The suspect has been arrested. He is not a policeman.”

Posted by Unknown at 9:09 am
Email ThisBlogThis!Share to TwitterShare to FacebookShare to Pinterest
Labels: Crime