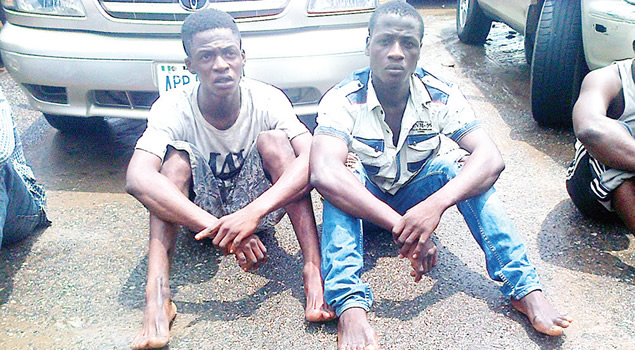 The Lagos State Police Command has arrested a suspected robber, Ebere Nwankwo, for allegedly attacking and raping a male victim in the Lekki area of the state.

This is just as two other robbery suspects – Jelili Babatunde and Ramon Haruna – were arrested by the police in the Isokoko, Agege area, while dispossessing pedestrians of their valuables.

The incident occurred in Lekki last Thursday, Nwankwo, who was armed with a gun, sneaked into Martins’ apartment on Goshen Estate in the Lekki area at about 4pm.

He was said to have ransacked the victim’s room and found N22,000.

It was learnt that Nwankwo thereafter allegedly ordered 16-year-old Martins to get on the bed, while he had sexual intercourse with him.

The suspect was afterward arrested by operatives from the Maroko Police Division, who were on a patrol in the area.

A source said the victim’s screams during the intercourse alerted the policemen.

He said, “The robber had threatened to force his victim to an Automated Teller Machine, where he would get more money from him. In the meantime, the suspect asked his victim to lie on the bed and he started having sexual intercourse with him.

Our correspondent gathered that Nwankwo told the police in his statement that he had sex with his victim to get some magical powers.

The Lagos State Police Public Relations Officer, SP Dolapo Badmos, said the robbery suspect would be charged to court with sodomy and stealing.

She said, “The suspect has confessed to the crime. He said the sexual intercourse was to make his victim forget about the stealing. We will charge him to court with sodomy and stealing.”

In the Agege incident, Haruna told our correspondent that his friend, Babatunde, lured him into the operation, adding that they had realised N11,000 and some phones, before they were arrested by the Isokoko division.

He said, “I am a mechanic. My parents are responsible people. It was bad friendship that made me to go into robbery. My friend had lured me to go out with him to attack those pedestrians. I rode the motorcycle that we used for the operation. Jelili (Babatunde) had a toy gun that we used in dispossessing people of their property.”

The police spokesperson, Badmos said the suspects would soon be charged to court.

Posted by Unknown at 8:47 am
Email ThisBlogThis!Share to TwitterShare to FacebookShare to Pinterest
Labels: Crime