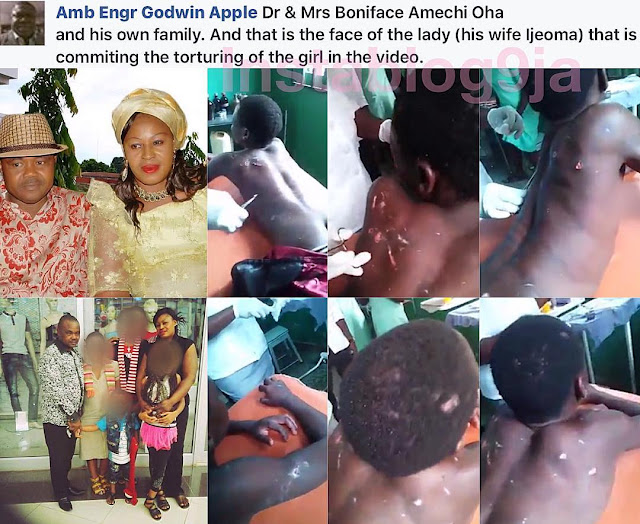 On his Facebook page, Amb Godwin Apple, who is leading the campaign to get justice for the girl, wrote:

"Dr & Mrs Boniface Amechi Oha and his own family. And that is the face of the lady (his wife Ijeoma) that is committing the torturing of the girl in the video.

When the little girl started crying in different tune last night during the torture, it attract the attention of the Vigilantee group in the area there in Obudu, and they rush immediately only to find the little girl in a very weak point, almost out of life, as the Vigilantee attempt to invite the Police, the lady 'Ijeoma Oha' offer them a N3,000.00 bribe so that they can over-look the situation, but God almighty help the vigilantee group to insist in inviting the police and the girl was taken to the Secret Heart Hospital Obudu, while the lady Mrs Ijeoma Oha, was taken away by the police from the Nigerian Police Command, Obudu Division. We are still trying to get the DPO of Obudu from Europe but the network service is not yet friendly..

ATTENTION PLEASE: It is with much sympathy that I, Ambassador Godwin Apple Agim, Ambassador with the Universal Peace Federation, a Special Consultative Status at the United Nations ECOSOC, established to renew the United Nations to build lasting global peace in the world, will this evening invite the operational bodies of UNICEF, UPF, UN and the Nigerian States Security Service SSS to commence the arrest of one Dr. Amechi Oha. A Chief Lecturer in Igbo department, FCE Obudu. He is one time Dean, School of Languages in the same Federal College of Education, Obudu in Cross River State of Nigeria. and his wife Mrs Ijeoma Amechi Oha, who also serve her NYSC in Cross River State and officially married to the said Amechi of the FCE Obudu. The video below shows how they adopt, enslave, concealed and assult this little girl in pretends of having her as a house maid. They should be both charge for crimes against humanity.
This message should also call for the attention of the following bodies:
1. The Inspector-General of Police
2. The National Security Adviser to the President of the Federal Republic of Nigeria.
3. The State Security Adviser to the Governor of Cross River State.
4. The Divisional Police Officer (DPO) Obudu.
5. SA to the Governor on Security Matters, Obudu.
6. SA to the Governor on Public Relations, as well as:
7. The Paramount Ruler of Obudu Local Govt Council.
The International observers will work through the Secretary-General of the Universal Peace Federation in Nigeria, Dr. Rapheal Raphael Ogar Oko for futher development.
God bless the Federal Republic of Nigeria."

Posted by Unknown at 9:24 am
Email ThisBlogThis!Share to TwitterShare to FacebookShare to Pinterest
Labels: Crime