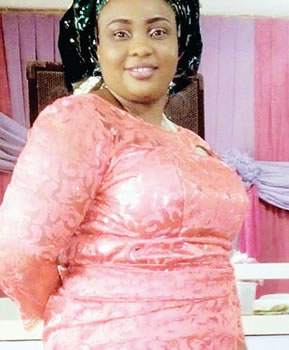 A 35-year-old woman, Loretta Ewere, has been electrocuted at her fiance’s home on Ajoke Kazeem Street in the Idimu area of Lagos State.

She was said to have been rushed to a private hospital in the area but was rejected before being confirmed dead at the Igando General Hospital.

Our correspondent, who visited the area on Tuesday, gathered that Ewere and Tolani had scheduled their wedding for November and preparation was in top gear when tragedy struck.

A resident, who did not want to be identified, said the incident happened around 1pm on Saturday, adding that it created chaos in the neighbourhood.

He said, “The man had wanted to change his old cable TV decoder and antenna. When power was restored, he discovered that he didn’t have electricity in his house.

“He wanted to do it himself, but neighbours advised him to get the service of an electrician. He contacted an electrician who billed him N2,500. But he said the charge was too high. He decided to go and rent a wooden ladder from someone in the area.

“While he was working, the wire fell and touched the pole she was holding and that was how she was electrocuted.”

PUNCH Metro learnt that Tolani called for help from a next-door neighbour, whose wife reportedly rushed to the scene to pull out the victim with her bare hands.

She was reportedly flung by the electric current.

An electrician was said to have been invited, who then disconnected the power.

“The woman fell down and hit her head against the concrete floor. People tried to resuscitate her by giving her milk; but she didn’t come round. A lot of time had been wasted. She was rushed to a private hospital in the area, but she was rejected.

“We took her to the general hospital, where she was confirmed dead. Her corpse was deposited in a mortuary,” another resident said.

PUNCH Metro gathered that Ewere, an indigene of Ewuru, Delta State, worked in Union Diagnostics, a medical lab in Ikeja, while Tolani, who hails from Ekiti State, worked with an insurance company.

When our correspondent visited the victim’s family house on Ogidan Street, Idimu, they said the family was too distraught to talk about the incident.

However, a relative, who identified himself simply as Charles, blamed the incident on Tolani’s stinginess.

He explained that the duo had been living together for the past four years, adding that the two families had started preparation for their wedding.

He said, “They did their introduction four years ago and since then, they had been staying together. Their marriage was slated for November and the two families have bought clothes and sent invitation to people.

“It was the man’s stinginess that killed her. If he had paid someone to fix the electrical fault, this would not have happened.”

Meanwhile, friends of the victim have started paying tributes to her on the social media.

One of them, Kehinde, wrote on Facebook, “Loretta (Ewere), a member of the Purchasing and Supply Students Association, The Polytechnic Ibadan, was kind-hearted, brilliant and reserved.  The industrious lady was preparing for her last two exams (slated for October 4 and 6) left for her to become a graduate when she died.  We love you, but God loves you most. I pray He accepts your soul and comforts your household.”

She said the corpse had been deposited in a mortuary for autopsy.

She said, “The woman, Loretta Ewere, was electrocuted around 9am. She was living with one Segun Tolani, to whom she was supposed to be married next month. They were fixing a GoTV antenna when power was suddenly restored. Ewere, who was holding the antenna wire, was electrocuted. The corpse has been deposited in a mortuary for a post-mortem examination.”

Posted by Lawrencia at 9:16 am
Email ThisBlogThis!Share to TwitterShare to FacebookShare to Pinterest
Labels: NijaDrama