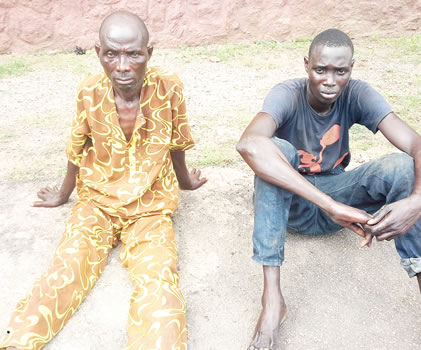 A 63-year-old man, Korede Odubela, has been arrested by the Ogun State Police Command for allegedly killing his 16-year-old stepdaughter, Amudat Oshimodi, for ritual purposes.

The suspect was said to have connived with another accomplice, Lekan Lawal, to commit the crime at Imosan village, in the Odogbolu Local Government Area of the state.

The two suspects were among the 12 suspects paraded at the command headquarters, Eleweran, Abeokuta, on Tuesday by the state Commissioner of Police, Ahmed Iliyasu, for various offences, including armed robbery, burglary and stealing.

Iliyasu said Odubela, who was the leader of the gang, connived with Lawal to strangle Oshimodi, after which they sold her head and hands to ritual killers.

The police commissioner said the men of the Special Anti-Robbery Squad received information about their activities and swooped on them on Monday, November 7, 2016.

Odubela said he connived with Lawal to kill his stepdaughter because the 16-year-old girl was always stealing her mother’s money.

He said, “The mother said we should kill her as a sacrifice for other children she had. She (Oshimodi) normally slept by the outside door. On that day, around 12 midnight, I invited Lekan Lawal, and he held the girl by the neck and strangled her while I held her legs.”

Odubela said he sold Amudat’s head to his son, Seun,  a herbalist who paid him N3,000, as part payment.

However, Odubela’s wife, Fausat, denied asking her husband to kill her daughter.

Iliyasu said the case was still under investigation, while the corpse of Amudat had been deposited at the morgue of the Ijebu Ode General Hospital.

The command also paraded suspected robbers –Tochukwu Njikonye, Abdulahi Abdulamid and Obinna Mbam – who were said to have been arrested on Monday, October 3, 2016, in the Ogbere area of the state. The police said they were arrested while robbing motorists of their valuables.

Iliyasu said the suspects were armed with two pump-action guns and one locally-made pistol, adding that they usually blocked the road with either truck or wood to “perpetrate their nefarious activity.”

Six other suspects were equally paraded for burglary and stealing. The suspects were said to have  burgled the computer laboratory of the Egba-Obafemi Community Grammar School, in the Obafemi-Owode Local government Area and carted away 95 tablets (computers) and their chargers.

Iliyasu said the school principal, Mrs. Ajiboye Olaide, reported the matter at the Owode-Egba Police Station on Wedneday, November 9, 2016, and the Divisional Police Officer and his men swung into action.

He said two suspects were arrested in the bushes around the school, which led to the arrest of the gang leader, Oluwagbotemi Ojo.

Iliyasu said the alleged receiver of the stolen computers, Sunday Olufemi, was also arrested in Ibadan, Oyo State, while all the computers were recovered.

Ojo, however, said the school’s security guard, Saheed Adamu, gave him information on how to burgle the computer laboratory.

The CP also disclosed that his men received information that some armed robbers used a house in Egbe village in Ijebu Ode as their hideout, adding that one Gbenga Olowolafe was arrested with one pump-action gun and one double-barrelled gun.

The suspect, however, said he was the coordinator of the Oo’dua Peoples Congress in the Egbe area.

Posted by Lawrencia at 10:31 am
Email ThisBlogThis!Share to TwitterShare to FacebookShare to Pinterest
Labels: Crime