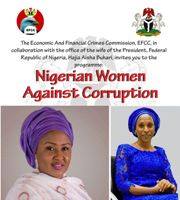 The Economic and Financial Crimes Commission, EFCC, is collaborating with the office of the wife of the President, Mrs. Aisha Muhammadu Buhari, to engage Nigerian women in a nation – wide sustainable fight against corruption.

The programme which is tagged: Nigerian Women Against Corruption, WAC, was initiated based on the significant role of women in the family and in the society at large.

The programme is scheduled to be flagged off by the wife of the President, Mrs. Aisha Muhammadu Buhari, in Abuja at the International Conference Centre, on December 7, 2016.

Acting Chairman, EFCC, Ibrahim Magu said the women engagement will help develop a comprehensive women-based programme of engagement that will enhance the fight against corruption.

He said women will thereafter help to act as watch dogs, foot soldiers and whistle blowers against corruption and to drive the regime of probity and accountability.

While speaking on the significance and why women need to buy into the corruption fight Magu said: “a woman who has the ability to build a home can as well tame the corruption monster”. While quoting the words of Diana Marriechild, he said “a woman is a full circle; within her is the power to create, nurture and transform”.

Significantly, the WAC programme is coming up on December 7, 48 hours before the internationally celebrated anti-corruption day which is Friday, December 9, 2016. The crusade will later be taken to the grass-root through the state and the local governments across the country.

Posted by Lawrencia at 10:03 am
Email ThisBlogThis!Share to TwitterShare to FacebookShare to Pinterest
Labels: NationalNews