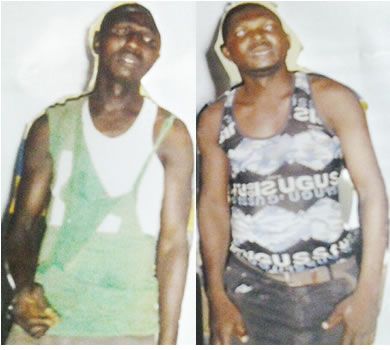 There was confusion in the Ifo area of Ogun State after a bus driver, Akorede Ogunjobi, and his conductor, Kazeem Adelere, were attacked by an angry mob for allegedly abducting eight pupils of Oyes Faithful College, Ifo.

The suspects would have been lynched, but for the intervention of policemen from the state command who took them into custody.

PUNCH Metro learnt that 10 pupils of the school had on Tuesday joined the commercial bus marked, AKD-948-XJ Lagos, at the Techno bus stop after leaving the school.

It was learnt that two unidentified men sat beside the driver, while the conductor manned the bus entrance.

After two of the pupils alighted at their designated bus stop, the driver was alleged to have refused to stop for other pupils.

When the pupils indicated that they wanted to alight at the bus stop, the driver was alleged to have shunned their calls and continued speeding on the expressway.

The conductor was alleged to have stood at the bus entrance to prevent the pupils from escaping.

Our correspondent was told that one of the pupils in Senior Secondary School 1, Akorede Aliu, 13, jumped off the bus while on motion.

Some minutes later, another male Junior Secondary School 1 pupil, Ajibose Fawasi, 11, was said to have also leaped out of the bus, leaving behind six female pupils.

A motorist was reported to have blocked the commercial vehicle’s path and forced it to a halt.

A lawyer, Isaac Durowoju, told PUNCH Metro he called the police to rescue the suspects from the mob, adding that injured pupils had been taken to the hospital.

He said, “After two of the pupils alighted at Iya Abiodun bus stop, other pupils observed that the driver took to the fast lane and started speeding.

“When they told the driver and the conductor where they would alight, the two men laughed at them. While on motion, two boys jumped out at different intervals, but the driver refused to stop. This was what aroused the curiosity of a motorist, who blocked him three bus stops from where he should have stopped.”

It was learnt that the two unidentified passengers, escaped from the scene while the suspects were being mobbed.

Our correspondent gathered that the driver and the conductor denied abducting the pupils at the police station.

A source said when queried on why they refused to pull over after the two pupils jumped out of the vehicle, they reportedly pleaded for mercy.

It was learnt that the state commissioner of police, Ahmed Ilayasu, had ordered that the case be transferred to the State Criminal Investigation and Intelligence Department, Eleweran.

A representative of Oyes Faithful College, Mr. Ayodele James, confirmed the incident to our correspondent, adding that the case was with the police.

She said, “The incident happened immediately we closed from the school around 4pm. There was an attempt to abduct some pupils, but a motorist prevented it.”

A parent of one of the affected pupils, Mrs. Olasumbo Olojede, said her daughter, Bisola, told her the driver and conductor wanted to take them to an unknown destination.

The mother added that although Bisola was still in shock, she was doing well.

Korede’s mother, Mrs. Risikat Aliu, said she did not know the extent of his injuries after he jumped out of the vehicle.

“But we give God the glory for the safety of the children,” she added.

The spokesperson for the Ogun State Police Command, Abimbola Oyeyemi, said, “The case was reported by the proprietress of the school around 5.30pm on Tuesday. When the students closed from school, 10 of them boarded a commercial bus. Two of them alighted at their designated bus stop.

“But the driver made an attempt to drive the remaining eight pupils to an unknown destination. It was a Good Samaritan who used his vehicle to block the bus when the pupils started shouting. Two of them even jumped out of the vehicle.

“The case has been transferred to the SCIID, Eleweran, on the order of the CP. At the end of investigation, the suspects would be arraigned in court.”

Posted by Lawrencia at 9:12 am
Email ThisBlogThis!Share to TwitterShare to FacebookShare to Pinterest
Labels: Crime